Ukrainians prepare to vote amid ongoing crisis in restive east 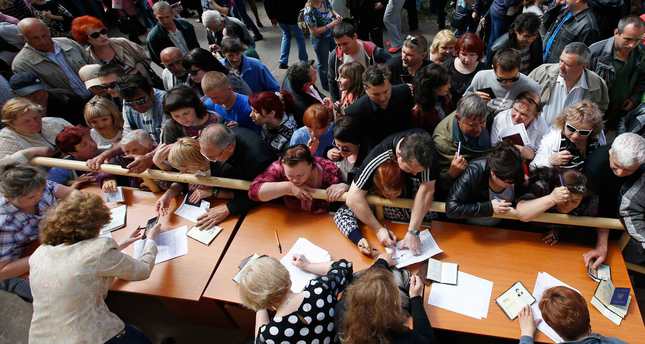 by Daily Sabah Oct 25, 2014 12:00 am
As Ukraine continues to battle a pro-Russia insurgency in its eastern region and accuses Russia of undermining its territorial integrity, Ukrainians are heading to the polls for Sunday's early parliamentary election to elect a new Verkhovna Rada, the Ukrainian parliament. The new parliament is expected to change the way the country is run while putting an end to the five-month long crisis in restive eastern cities where pro-Russian sentiments are high. Ukrainian President Petro Poroshenko's bloc, who still favors a military solution to end the crisis, holds a significant majority in Sunday's election. Yet ongoing military intervention in rebel-held areas show that little to no progress has been made for peace between the Ukrainian government and pro-Russian separatists. The situation in Ukraine has worsened since the Maidan protest erupted in February 2014. Since then, Crimea was annexed by Russia and Ukraine has lost large areas of the Donbass region and the industrial region in the east and southeast.

Poroshenko called on Ukrainians to go and vote in the snap parliamentary election. "I urge everybody to come to the polling stations and complete the formation of a new power structure that started in June," he wrote on Twitter on Thursday evening, as reported by the Interfax-Ukraine news agency. However, not all Ukrainians will be able to vote in Sunday's elections because pro-Russian separatist have rejected taking part in the snap parliamentary election. Close to three million people who live in separatist-controlled areas will not be able to cast their votes on Sunday. The local authorities in the self-proclaimed Donetsk and Luhansk People's Republics announced that they will run a special parliamentary election on Nov. 2 in the rebel-held areas. Poroshenko signed a law on Oct. 16 granting special status to the region that allows them to rule themselves for the next three years and hold local elections in eastern Ukraine in December. However, the mainly Russian-speaking Donetsk and Luhansk regions refused to recognize the law as they have sought full independence backed by Russia since they declared their autonomy in May.

A total of 29 political parties and 6,627 candidates have been registered to participate in the election to run for 450 seats. The Central Election Commission (CEC) announced on Friday that it has registered more lists of candidates from another 16 parties. Ukraine's election threshold is 5 percent.

Meanwhile, the conflict in Ukraine has led to worsening humanitarian conditions as more than 824,000 people have fled from their homes, the U.N. refugee agency said on Friday. "Ongoing fighting in the east and the resulting breakdown of basic services continues to drive more people from their homes," the report read. The need for humanitarian aid is significantly increasing in Donetsk, Kharkiv and in the Dnipropetrovsk and Zaporizhia regions, the U.N. agency reported.