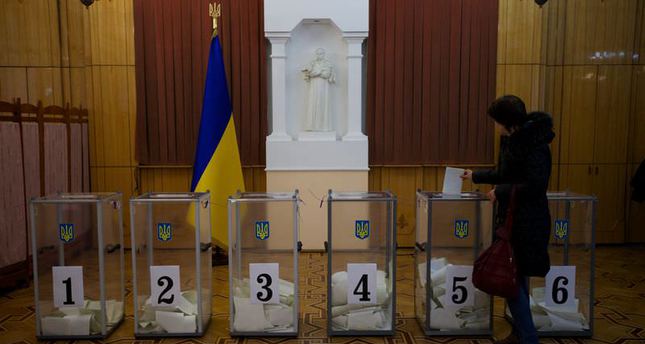 by Oct 26, 2014 12:00 am
Ukrainians voted on Sunday in an election that is likely to install a pro-Western parliament and strengthen President Petro Poroshenko's mandate to end separatist conflict in the east, but may fuel tension with Russia.

Voting started on a cold but sunny morning in Kiev in the first parliamentary election since street protests in the capital last winter forced Moscow-backed leader Viktor Yanukovich to flee and ushered in a pro-Europe leadership under President Poroshenko.

A loose political grouping that backs Poroshenko was expected to become the leading force in the 450-seat assembly, giving him a mandate to pursue a peace plan for the east and carry out deep reforms sought by Ukraine's European Union partners.

Poroshenko said in a televised address on Saturday he wanted a majority to emerge that would see through laws to support a pro-Europe agenda and break with the Soviet past.

"Without such a majority in parliament, the President's program ... will simply remain on paper," he said.

With diminished pro-Russian influence and following a strong European integration agenda, it will be one of the most radical parliaments since Ukraine gained independence in 1991.

President Poroshenko called the election early to try to clear out Yanukovich loyalists and produce an assembly that also has a pro-Europe majority. Opinion polls indicated a political grouping supporting Poroshenko was likely to become the main force in the parliamentary assembly.

The emergence of a strong force committed to a united Ukraine could place new strains on ties with Russia which the Kiev leadership blames for backing rebels in a conflict that has killed more than 3,700 people and destroyed the economy.

During Sunday's election, twenty-nine parties run, though only a handful were expected to reach the 5 percent barrier required to secure representation in the Ukrainian parliament. About 2,000 international observers, including a team of about 800 from the Organization for Security and Cooperation in Europe, were in place to monitor polling procedures. Many voters were not able to cast ballots in Crimea, which has been annexed by Russia, and in parts of the east where separatists are in control. Close to three million people live in separatist-controlled areas did not cast their votes on Sunday. Election authorities said voting would not take place in 27 constituencies, including 12 in Crimea, meaning that only 423 deputies will be elected. The local authorities in the self-proclaimed Donetsk and Luhansk People's Republics announced that they will run a special parliamentary election on November 2 in the rebel-held areas.

Meanwhile, President Poroshenko visited to Donbass region on Sunday where troops are fighting against a pro-Russian insurgency in rebel-held areas. His visit is considered as part of his agenda to put an end to five-month long crisis in the restive eastern cities where pro-Russian feelings are extremely high.