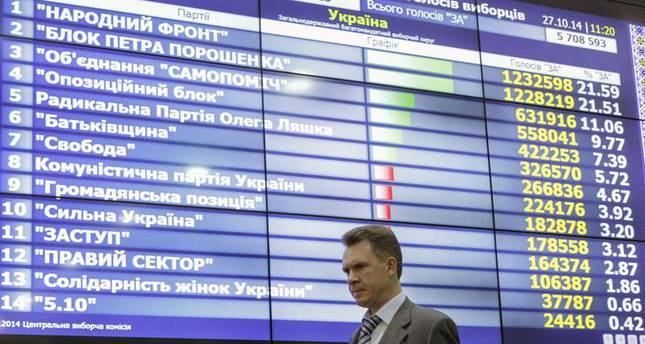 by Associated Press Oct 27, 2014 12:00 am
With more than one-third of the votes counted, two allied pro-European parties in Ukraine that ran on a platform to enact radical reforms took a joint lead Monday in a parliamentary election.

Poroshenko said after Sunday's election that he wanted Western-oriented parties elected to quickly form a broad reformist coalition. Negotiations on forming that coalition are expected to begin Monday and be completed within 10 days.

A recently formed pro-European party based in western Ukraine, Samopomich, was running third with almost 11 percent of the vote.

The vote has led to an overhaul of a parliament once dominated by loyalists of former President Viktor Yanukovych, who sparked the protests that caused his ouster with a decision to deepen ties with Russia.

Anti-Russian sentiment has spiked in Ukraine as the country battles with separatists in the east many believe are supported by Moscow.

As a result, the election has favored the chances of parties with staunchly pro-Western or nationalist agendas.

Nonetheless, the Opposition Bloc, which pundits believe largely drew its support from Yanukovych's once-ruling Party of Regions, has put in a strong showing with a 9.8 percent, with around 33 percent of the vote counted.

International observers from the Organization for Security and Cooperation in Europe were due to share a preliminary assessment of the election later Monday.

While around 36 million people were registered to vote, no voting was held on the Crimean Peninsula, which was annexed by Russia in March, or in parts of Ukraine's easternmost regions of Donetsk and Luhansk, where shelling remains a daily constant. The fight against armed separatists on the border with Russia has claimed the lives of more than 3,600 people.

With almost 3 million people in areas near Russia's border unable to vote, it seems probable pro-Western parties were given an advantage.

Slightly more than half of the incoming members of parliament are being elected by means of party lists, and the remainder are picked in direct local contests. That has opened the door to likelihood of victories by candidates from smaller parties, such as the Right Sector ultranationalist group.

With half the votes counted in his district in the Dnipropetrovsk region, Right Sector leader Dmytro Yarosh was leading comfortably with 30 percent, almost twice as much as his nearest rival.

Russian Foreign Ministry made released a statement over the early results, saying the elections offer a chance for peace; however "nationalists" could undermine the process.

Council of Europe's General Secretary Thorbjorn Jagland made a statement on Monday, welcoming the elections as the "a clear expression of the Ukrainian people's desire for peace, democracy and unity of the country."

Following a calm period during the elections, heavy shelling erupted on early Monday near Donetsk, capital of the insurgent region of Donbas.