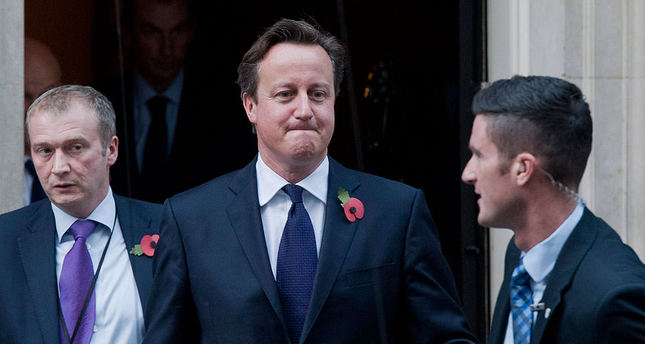 by Oct 28, 2014 12:00 am
Prime Minister David Cameron said Britain would not pay "anything like" the 2.1 billion euros (1.6 billion pounds) the European Union wants from London after Eurosceptic media praised him for taking what they called a noble stand against money-grabbing "Eurocrats".

An angry Cameron on Friday refused to pay the bill by a Dec. 1 deadline, accusing the EU executive of ambushing him with an unacceptable demand in an appalling way.

On Monday, he went further saying he had no intention of paying the bill in its current form, suggesting he wanted it sharply reduced.

"We're not paying 2 billion euros on the first of December and we're not paying ... a sum anything like that," Cameron told parliament. "That is very clear."

He has said the bill made it harder to make the case to keep Britain in the European Union before a membership referendum he has promised in 2017 if he is re-elected next year.

The payment dispute and the way it has been spun by the popular press and politicians highlighted Britain's decades-old distrust of the EU, a shift towards greater Euroscepticism and the intemperate nature of any debate about Europe in Britain.

It also illustrated how the rise of the anti-EU UK Independence Party (UKIP) has dramatically shifted the political center of gravity towards Euroscepticism.

Cameron's Conservatives fear UKIP, which wants lower immigration and a British exit from the EU, threatens their re-election chances. It has poached two of Cameron's lawmakers, winning its first elected seat in Britain's parliament this month, and is on track to win a second in November.

Britain was hit with the higher bill because its economy has become more successful, something evidenced by data provided by its own Office for National Statistics. Other EU states were clobbered with painful bills too, and in the past Britain has been the beneficiary of such EU budget redistributions.

But much of that nuance has been lost in a public debate where the country's right-wing press has cast Britain as being punished by the EU for its rising economy - the fastest-growing in the EU - to pay for the mistakes of two of its oldest historical foes: France and Germany.

"Why should Britain be punished with the shock EU bill for fragile success while France is rewarded with a rebate for abject failure?" the best-selling Sun tabloid asked on Monday.

"Why should we make taxpayers borrow 1.7 billion pounds only to hand it over to feckless bunglers? Eurocrats like Jose Barroso (the outgoing commission president) can strut and bluster about our legal obligations but we have the whip hand."

With many Britons blaming the EU for what they see as unacceptably high levels of immigration from the bloc in recent years, such rhetoric goes down well with many voters, even as, incongruously, opinion polls show support for staying in the EU is at its highest in 23 years.

On Monday, the EU warned Britain it would put the country's cherished EU budget rebate at risk if it tried to change the rules in response to the surprise bill.

Britain's rebate, which is 5.9 billion euros for 2014, was created to offset the relatively lower share of cash the country got from EU agricultural and infrastructure funds compared with other countries. It is controversial with some member states.

EU Budget Commissioner Jacek Dominik said there was "no possibility" under current EU rules of giving Britain more time to pay the bill. He warned it would be risky for Britain to seek to change the current agreement over member states' contributions because it also covered the rebate.

"If you open this act for future negotiations, you open a Pandora's box," Dominik said.

Cameron's spokesman rejected out of hand, however, the suggestion that Britain's rebate would be at risk if it tried to change the rules in response to the bill.

When asked to confirm that the rebate would be off the table in talks about the bill, the spokesman simply said: "Yes".

The commission says its demand, though much larger than usual, is routine. Michael Gove, a senior Conservative lawmaker, said on Sunday it looked like deliberate sabotage.

The way the row over the bill suddenly flared up has raised questions about when Cameron and his team first knew about the bill and why they appeared to have been so blindsided.

The opposition Labour party said the prime minister knew months ago and should have acted.

"He spends all of his time negotiating with his party about Europe when what he should be doing is the basic work of getting a better deal for Britain in Europe," Labour leader Ed Miliband told parliament. "Once again he shows that for all his bluster he has been asleep at the wheel."

Cameron said he only learned of the bill last week.

In the past, Labour and the Liberal Democrats, the junior partner in the country's coalition, have often tried to resist the temptation of portraying clashes between Britain and Brussels in black and white terms.

But this time, with a national election in less than seven months, all three mainstream political parties, including the traditionally pro-EU Liberal Democrats, condemned the EU for presenting Britain with such a bill.

Finance minister George Osborne is expected to discuss the bill with his German counterpart in Berlin later this week and EU finance ministers will broach the matter next week.