Ukraine looks to the West, signals clear break from Russia 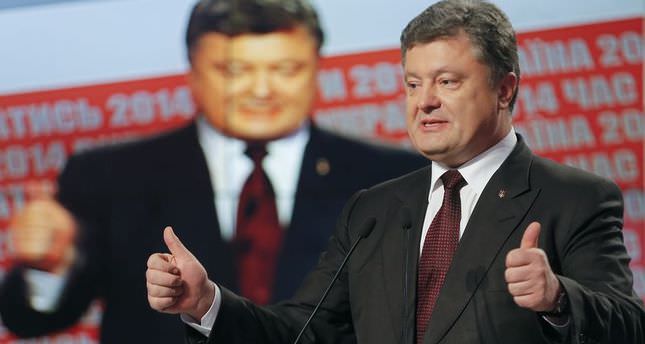 As Pro-Western parties set to dominate Ukraine's parliament, Sunday’s election handed President Poroshenko a mandate to end a separatist conflict and steer the country further out of Russia's orbit into Europe's mainstream

Ukrainian President Petro Poroshenko planned to start coalition talks on Monday after exit polls and partial results showed most of the groups that were holding up democratic and legal reforms demanded by the European Union had been swept out of parliament on Sunday.

He still faces huge problems. Russia is resisting moves by Kiev to one day join the European Union, a ceasefire is barely holding in the east where government forces have been fighting pro-Russian separatists, and the economy is in dire straits.

Russia's President Vladimir Putin can still influence events, not least as the main backer of the rebels in the east and through Moscow's role as natural gas supplier to Ukraine and the EU.

But with his own bloc and a party led by his ally, Prime Minister Arseny Yatseniuk, running neck and neck on more than 21 percent support after more than a quarter of votes on party lists were counted, Poroshenko is assured of dominating parliament.

"The majority of voters were in favour of the political forces that support the president's peace plan and seek a political solution to the situation in the Donbass," Poroshenko said soon after polls closed, referring to the region where fighting has been heaviest in the industrialised east.

Poroshenko and his allies are trying to restore normalcy to the sprawling country of 46 million after turmoil and violence that began a year ago with street demonstrations against Poroshenko's pro-Russian predecessor Viktor Yanukovich.

Yanukovich was overthrown in February in what Russia called a "fascist coup". Moscow responded by swiftly seizing and annexing Ukraine's Crimea peninsula and backing separatist rebellions in eastern regions. Some allies of Yanukovich will remain in parliament: the latest figures put the Opposition Bloc of ex-Fuel Minister Yuriy Boiko on 9.76 percent, easily enough to put the party into parliament.

But other traditional allies of Russia, such as the communists, flopped. The make-up of the future pro-Europe assembly seemed likely to spell future tensions with Moscow.

It will be the first time the communists have been out of parliament since Ukraine gained independence from the Soviet Union in 1991.

After months of beating back the separatists, Ukraine's troops faced sharp reversals in August, which Kiev and its Western backers say was caused by Moscow sending armoured columns with hundreds of troops to aid the rebels. Moscow denies intervening directly on the ground.

Since then, Poroshenko has said he will resolve the conflict in the east only by political negotiations. NATO says Russia is still supporting the rebels in the east with soldiers and equipment.

In an early reaction to the vote, Russia's foreign ministry said the election offered a chance for peace in its east but that a high number of "nationalists" in the chamber could undermine the process, RIA news agency reported.

Voting did not take place in areas held by the rebels or in Crimea. Separatists entrenched in the big eastern cities of Donetsk and Luhansk said they were ignoring the Ukrainian election and still planned to go ahead with a rival vote on Nov. 2 to further their calls for independence.

Heavy shelling rocked the outskirts of the pro-Russian rebel stronghold of Donetsk in eastern Ukraine on Monday, one day after Ukraine held a parliamentary election, the city mayor's office and officials in Kiev said.

"Powerful firing has been heard from high-calibre guns and explosions," the Donetsk mayor's website said.

Despite a Sept. 5 ceasefire between Kiev and pro-Russian separatists in the east, tensions remain high. More than 3,700 people have died in fighting in the east, including nearly 300 passengers on a Malaysian airliner shot out of the sky over pro-Russian rebel-held territory.