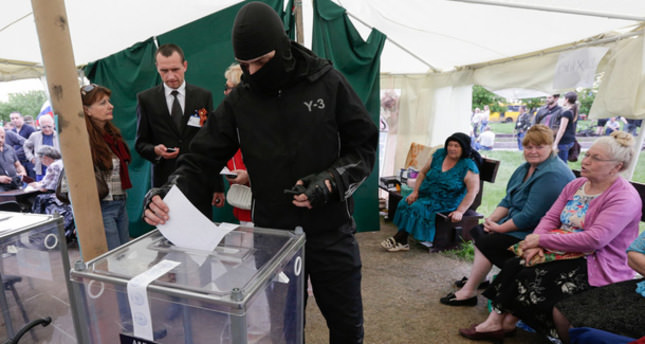 In defiance of Western criticism, pro-Russian separatists cast their votes on Sunday with the support of Russia, further straining tensions between Russia and the West

Pro-Russian separatists in eastern Ukraine, seeking regional leadership closer to Russia, cast their votes on Sunday in an election that Kiev and the West refused to recognize. As Moscow explicitly supports the separatist election, Western countries believe that it would undermine the peace process in the war-torn east while leading to further tensions with Russia.

On Sunday, residents favoring independence went to the polls to determine whether they seek independence or joining Russia. Voters aged 16 and up who reside in the self-styled Donetsk People's Republic cast their votes in 363 polling stations. More than 100 polling stations were ready on Sunday morning in the similarly self-proclaimed Luhansk People's Republic. Ukrainian refugees who fled the warn-torn east were able to cast their votes in Russia's Rostov, Voronezh and Belgorod regions. There are 2.2 million people live in the Luhansk region and 4.3 million in the Donetsk region.

Russian authorities announced last week that Moscow would recognize separatist elections held in the two rebel-controlled regions in eastern Ukraine, a move that could presumably undermine the peace process of de-escalation and that was agreed to in the Minsk Protocol of Sept. 5 and the Minsk Memorandum of Sept. 19. Russia's recognition of separatist election has raised tensions between Russia and the West. The EU announced on Sunday ahead of the elections that the latest move from pro-Russian rebels violates Ukrainian law and thus refused to recognize the leadership and parliamentary polls in the self-proclaimed Donetsk and Luhansk people's republics, the chairman of European Parliament's Committee on Foreign Affairs said in an interview with La Premiere radio, as Itar-Tass Russian news agency reported.

The U.S. condemned the separatist election and refused to recognize any results from Sunday's poll, urging "all members of the international community to do the same." Recalling separatists' commitments under the Minsk Protocol and the Minsk Memorandum, the White House stated in a press briefing on Friday: "The only legitimate local election in eastern Ukraine will be held on Dec. 7, as prescribed by the Special Status Law signed by President [Petro] Poroshenko for parts of Donetsk and Luhansk, and in keeping with the Protocol that the separatists signed with Ukraine and Russia in Minsk, Belarus, on Sep. 5."

"The United States will not recognize any election held in separatist-held areas that does not comport with Ukrainian law and is not held with the express consent and under the authority of the Ukrainian government," President Barack Obama said in a statement released on Oct. 27.

Pro-Russian rebel groups rejected a law that granted a certain degree of autonomy to rebel-held areas that was approved by the Ukraine parliament in September as part of a peace deal under the Minsk Protocol and the Minsk Memorandum in a bid to end the months-long separatist insurgency. The Moscow-backed rebels have been seeking full independence having declared autonomy in May by holding an independence referendum, which was not recognized by Kiev and the West.