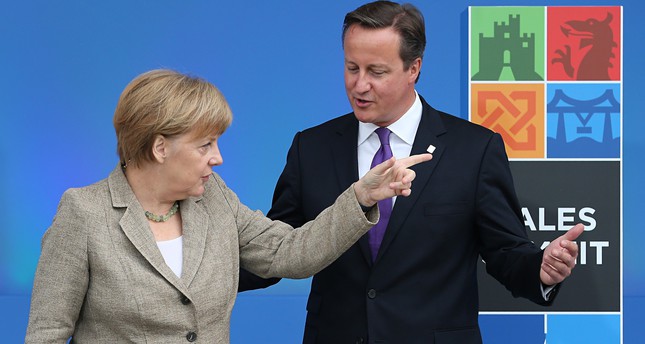 by daily sabah
Nov 04, 2014 12:00 am
As Britain hardens its line on border and immigration policies, German Chancellor Angela Merkel warned British Prime Minister David Cameron that the proposed reforms on immigration would further strain the country's relationship with European Union member states. The British prime minister's tough stance for a cap on unskilled migrants has faced severe criticism that German Chancellor would rather propose that Britain leaves the EU than attempt to change the fundamental rules of the EU regarding the free movement of people, as Der Spiegel newspaper reported on Sunday.

In response to Britain's latest effort to change its immigration policy, Merkel, head of the strongest member of the EU, stresses that Britain's move would endanger the free movement of people which is guaranteed as one of the founding principles of the 1957 Treaty of Rome. Britain's immigration cap, which applies to immigrants from Eastern European member states, has faced severe criticism from both former European Commission President Jose Manuel Barroso and the current president of the EU Commission, Jean Claude Juncker, who said that the immigration cap would create "first and second-class citizens" within the EU.

The political debate in the U.K. over immigration policy has become increasingly heated as British prime minister and other party leaders have hardened their stances on the issue. Opinion polls show immigration is a major concern for voters and it has fueled the rise of the U.K. Independence Party (UKIP) which may sink Prime Minister Cameron's chances of staying in power after the May election by splitting the conservative vote. The anti-immigration UKIP backs stronger immigration curbs and the U.K.'s exit from the EU. The growing anti-immigration rhetoric in the country signals an alarming attitude toward migrants who choose to settle in Britain, which has many pull factors for people choosing to migrate there. The impact of immigration on Britain's future demographic trends, economy and government financing has been of crucial importance for many Britons as they all become hotly debated topics.

By the end of 2013, the U.K. received 23,507 new applications for asylum. The population of refugees, pending asylum cases and stateless persons made up just 0.23 percent of the population. 126,055 refugees, 23,070 pending asylum cases and 205 stateless persons were reported in the U.K., according to 2013 data reported in the United Nations High Commission for Refugees 2013 Global Trends Report. In comparison with other developed countries like Germany, Sweden and the United States, the U.K. has been hosting the smallest number of refugees. As the world suffers from worsening humanitarian crises in various countries – mainly Syria and Iraq – due to unabated armed conflicts, situations of general violence or violations of human rights, the number of people applying for refugee status in the U.K. is expected to increase.

Prime Minister Cameron's reform plan consists of cutting the number of EU immigrants with low skills. Britain's proposed immigration cap includes restrictions imposed on migrants from EU member states. The British move is expected to hit the eleven Eastern European states, whose citizens benefit most from the EU immigration policy that supports freedom of movement within the EU.

In addition, Britain refused to participate in rescue missions to save migrants attempting dangerous sea crossings. The denial came on the basis that such a mission would create a pull factor for illegal immigration while encouraging more migrants to leave their home countries to live under the better conditions that exist in the U.K. The British government's denial to support search and rescue missions to save refugees in the Mediterranean Sea has faced growing criticism from international human rights organizations like Amnesty International saying that such a move would be "immoral."