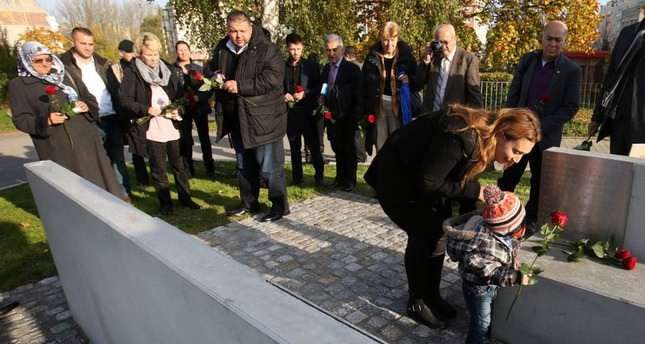 by AA
Nov 04, 2014 12:00 am
The German government has still not honored its promise to shed light on the murders of eight Turkish immigrants by the neo-Nazi terror cell the National Socialist Underground, families of the victims and their lawyers have told The Anadolu Agency.

Their comments on Tuesday came years after 10 people - eight Turkish immigrants, a Greek immigrant and a German policewoman - were murdered by the group, commonly known as the NSU, without arousing the suspicion of the German police or intelligence services.

Abdulkerim, the son of Enver Simsek who was killed by the NSU in 2000 - the group's first victim - told The Anadolu Agency: "Three years ago, Chancellor Angela Merkel promised us a full investigation. She told us that we would find answers to all our questions. But I do not see the government actively pursuing this goal,"

The German public only learned about the NSU, and its role in the murders which were carried out between the years 2000-2007, on 4 November 2011 when two members of the organization reportedly died in a murder-suicide following an unsuccessful bank robbery.

Despite various parliamentary investigations and an ongoing trial of a suspected NSU member and four supporters, major questions related to the murders are yet to be answered.

Families still want answers as to why the neo-Nazi group targeted their family members and whether they acted alone or were supported by other groups or circles within the state security organizations.

Attorney Adnan Menderes Erdal said: "I believe that some institutions of the German state, like the domestic intelligence agency, are not willing to shed light on these murders."

Since a high-profile NSU trial which began in May 2013, Erdal has been representing the victims of an NSU bomb attack which targeted the Turkish community in Cologne in 2004.

According to Erdal, the ongoing trial has to date failed to reveal any significant information on the terror cell and its suspected links, due to the reluctance of security organizations to share information with the judiciary.

"I am not optimistic," he said.

Since the late 90's, Germany's domestic intelligence agency, or BfV, recruited various informants from the right-wing scene who also had contacts with the neo-Nazi cell.

But the agency failed to prevent the murders or arrest the suspects who had lived underground since 1998 with fake identities.

Beate Zschaepe, the main suspect and the only surviving member of the neo-Nazi terror cell, has so far refused to give evidence.

Despite growing doubts about the outcome of the NSU trial, families of the victims renewed their call on Tuesday on German government to do more to help reveal the truth behind the murders.

"This is what Chancellor Merkel promised to us. For the time being it seems difficult to happen at the ongoing trial. But I hope that one day it will happen and we will learn the truth," he said.

Until 4 November 2011, the police and domestic intelligence services excluded any racial motives behind the murders, instead treated immigrant families as suspects, assuming there were links between them and mafia groups and drug traffickers.

Gamze, the daughter of Mehmet Kubasik who was killed by the NSU in 2005, said they had had to face major difficulties since her father's murder.

"We were victims, but nobody believed in us. We were left alone," Kubasik said.

She underlined that, after the disclosure of the existence of the NSU group in 2011, they had the hope that there would be a full investigation into it.

"At the beginning of the NSU trial, I was hopeful that all of my questions would be answered. But unfortunately it has not been the case," she said.

Attorney Seda Basay Yildiz, who is representing the Simsek family at the trial, underlined the need for politicians to put growing pressure on domestic security and intelligence organizations in order to help reveal the truth.

"Today, we need the formation of a new parliamentary investigation committee at the federal level. Such a committee can request confidential files, hear officials from the security organizations," Yildiz said.

"I don't believe that Germany, a democratic country with rule of law, would try to hide something. I believe in this democratic system. But what we have witnessed so far is also raising suspicions among us, among the families," she said.

"We should move fast by forming an investigation committee because, over the passage of time, revealing the truth becomes more difficult," she added.

Three years ago the BfV acknowledged past wrongdoings in struggling effectively against the far-right and promised to carry out "comprehensive reforms".

The BfV has repeatedly denied there have been any relationships between its staff and agents and the NSU murders.