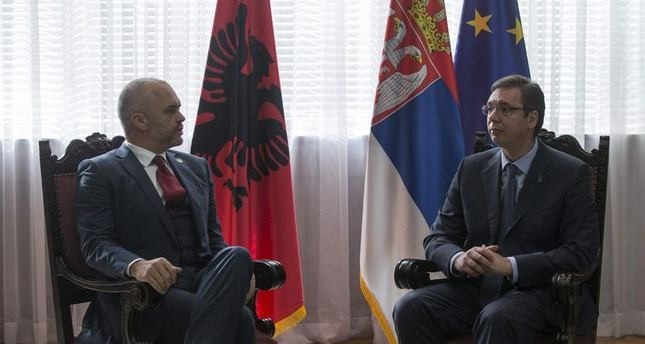 Albanian Prime minister, Edi Rama, is visiting Serbia for the first time in 68 years, in a visit expected to begin a new phase in the historically sour relations between the two countries.

The visit of the Albanian Prime Minister was initially scheduled to take place on October 22, but was later postponed to November 10, due to incidents that broke out during the 2016 Euro Qualifiers football match between the two countries.

"We have entirely different positions on Kosovo, but the reality is one and unchangeable", said Rama. "According to the constitution Kosovo is Serbia and I am obliged to say that no one can humiliate Serbia", his counterpart, Aleksandar Vucic, replied.

The Kosovo issue, one of many historic conflicts between the two countries, is believed to be one of the top matters being discussed during the bilateral meetings. The Kosovo conflict was put forward to be solved by the European Union, as part of Serbia's application for full membership to EU, earlier this year.

"We view the visit as the opening of a new era", had announced a report from the Serbian Prime Minister's office.

The conflicting relationship between the two countries dates back to 1912, when Albania declared its independence from the Ottoman Empire. For Serbs, Kosovo and its western part Metohija represents the cultural birthplace for their nation, while the region was mainly populated by Albanians. As part of the historic developments and wars in the Balkans, the relations between Albania and Serbia were built on conflicts.

The violent rivalry over Kosovo surfaced after the breakup of Yugoslavia, when Slobodan Milosevic's regime aimed to keep Kosovo within a Serbian dominated federation and decreased its autonomy. The attempts turned into ethnic and cultural cleansing against Albanians in the late 90's. The conflict was frozen after the US-led NATO intervention on Serbia and its forces in Kosovo, giving Kosovo its de-facto status of an independent region from Serbia. Kosovo has been partially recognized as the Republic of Kosovo since February 2008.

According to UN estimates, at least 5,000 Kosovars were executed, 1.5 million people, or 90 percent of the population of Kosovo, were expelled from their homes, and some 225,000 Kosovar men went missing.