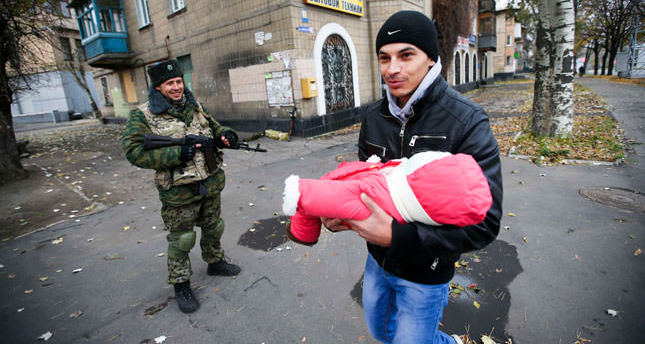 by daily sabah
Nov 19, 2014 12:00 am
The ongoing heavy clashes in the restive eastern Ukraine, despite a peace deal that has failed to end the hostilities, have begun to steadily erode the hope that peace can be attained in eastern Ukraine. Fighting caused the death of five more Ukrainian soldiers while battling with Russian-backed rebels on Monday as the Kiev government and pro-Russia rebels still appear to be far apart on the status of the eastern districts of the country,.

"Over the past day, five soldiers have died and eight were wounded due to shootings and improvised explosive devices," Ukrainian military spokesman Vladyslav Seleznyov said in a statement, AFP reported.

Since the cease-fire took effect on September 5, both sides have accused each other of having violated the proposed peace plan that had already been on volatile ground as dozens of violations were reported in the eastern city of Donetsk and the war-ravaged Lugansk region, where rebel's hold the main city.

The Trilateral Contact Group, composed of representatives from Ukraine, Russia and the Organization for Security and Cooperation in Europe (OSCE), reached an agreement during the peace talks in Minsk, Belarus, held on September 5. The Minsk accords included granting decentralized power to the local self-government in certain districts of Donetsk and Luhansk regions and allowing the eastern cities to strengthen relations with Russia. The Minsk memorandum, dated September 19, was agreed between pro-Russian separatist leaders and Kiev government representatives stipulating the withdrawal of heavy weapons and creation of a 30-kilometer buffer-zone to put an end to the bloodshed. However, pro-Russian separatists have refused to comply with the cease-fire agreement, thus continuing heavy shelling in the restive east.

After the Russian annexation of Crimea in March 2014, the tension between pro-Russian separatists and Ukrainian forces has escalated and turned the country into a battle zone. As rebels began to seize government buildings and security services installations in Donetsk and Luhansk regions in April, Kiev government launched a "counterterrorist operation" against the rebels.

With the months-long conflict still unresolved, the death toll has increased up to 4,100 with nearly 10,000 wounded, according to figures from the U.N.