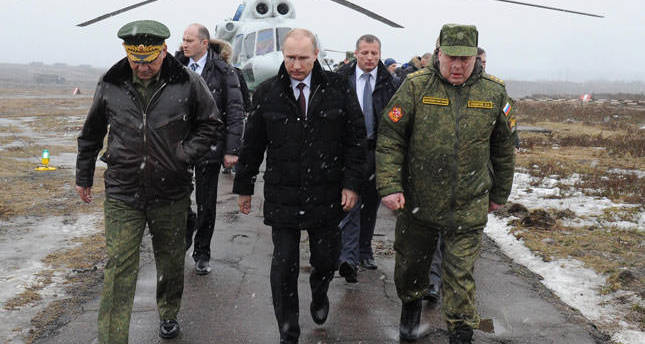 In the face of Georgia’s commitment to a pro-Western path, Russia is set to strengthen bilateral relations with Moscow-backed South Ossetia by increasing its military presence, thus expanding its sphere of influence

Following Russia's heavy military involvement in the armed conflict in the embattled eastern Ukraine, Moscow continues to extend its sphere of influence over separatists-held regions in former Soviet states, particularly in the two Georgian breakaway regions, Abkhazia and South Ossetia. A new integration treaty is set to be signed between Russia and South Ossetia in order to develop bilateral relations, primarily extending Russian military assistance to the breakaway territory.

"With colleagues from the Russian presidential administration, we are working on a new comprehensive integration treaty. It will significantly differ from the current one, as it will bring relations between our countries to a qualitatively new level, first of all in the military sphere," Boris Chochiyev, the chief of staff of the South Ossetia presidential administration, told Russian state-run news agency Itar-Tass on Thursday.

Russia and the self-proclaimed South Ossetia signed the current treaty in September 2008 in an effort to improve mutual cooperation, thus deepening ties between the separatist enclave and the Moscow government. After the dissolution of the Soviet Union, there has been a strained relationship between Georgia and Russia. Relations deteriorated in 2008 after Russia went to war with Georgia over the two break-away regions. Since then, Russia has provided significant backing and support to the separatists in the self-proclaimed regions while enhancing its influence over these separatist regions.

Russian plans to sign a new integration treaty with the Georgian breakaway province of Abkhazia, which was condemned by both NATO and Georgia, an ex-Soviet country that has remained committed to a pro-Western path. Georgian Prime Minister Irakly Garibashvili accused Russia of having a "destructive policy" toward the self-proclaimed regions while stating that Russian military expansion over ex-Soviet territories would bring greater damage to the already deteriorated relations between the two states. "I would like to express our deep concerns and regret that, despite our constructive approach to Russia, the Russian side didn't respond to our constructive policy in the same spirit," the Georgian prime minister said on Monday, during talks with NATO Secretary General Jens Stoltenberg.

In response to Russia's heavy involvement in the separatist regions in the ex-Soviet states – eastern Ukraine, Georgia and Crimea – NATO and the EU has worked to establish closer ties with these states to make them firmly set on a pro-Western course. Regarding Georgia's ambition to join NATO and the EU, the EU's foreign policy chief Federica Mogherini urged Georgia on Monday "to avoid a climate of political retribution and to improve the judiciary and rule of law," while praising Georgia's reform progress on the pro-Western path.

The standoff between Russia and the West has worsened over the crisis in eastern Ukraine. Russia is accused of increasing military reinforcements in the Donbass region in eastern Ukraine. The West has condemned Russian military reinforcement in the restive east to keep its influence over the separatists. The further Russian incursion into Ukrainian territory is seen as a violation of Ukraine's territorial integrity, while straining tension between the West and Russia.

In addition to the Russian invasion of South Ossetia, Georgia, the Russian annexation of the Crimean peninsula and the Crimean status referendum is another indicator of Russian military involvement in ex-Soviet countries, and a violation of the territorial unity. The referendum on the status of Crimea held on March 16, 2014, allowed the secession of Crimea from Ukraine, as more than 96 percent of Crimeans voted for the integration of the region into the Russian Federation. Following the referendum, Russia approved a draft bill that recognizes Ukraine's autonomous region of Crimea as an independent state. Yet, the United Nations General Assembly Resolution 68/262 on Ukraine's territorial integrity condemned the referendum.