WikiLeaks founder makes a public appearance with Chomsky in London 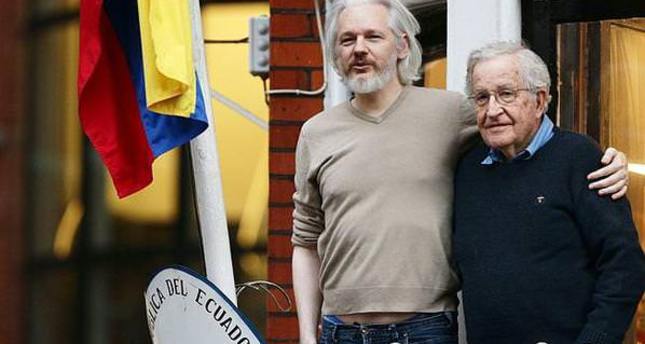 The WikiLeaks founder Julian Assange made a public appearance with the US philosopher and activist Noam Chomsky on the balcony of the Ecuadorian Embassy in London, on November 25.

Assange has been holed up in the embassy, a small ground floor apartment near London's Harrods department store, for more than two years.

The Australian fled there in 2012 to escape extradition to Sweden, where he is wanted over sex crime allegations.

Ecuador has granted him refugee status, but British police have so far refused to let him leave.

Assange told reporters during a news conference in August that his health had suffered during his time at the embassy. The Australian, however, fears that if he leaves the embassy building, he will be transferred to the U.S. to be quizzed about the activities of Wikileas.

Chomsky said in December 2011: "Julian Assange should be congratulated for carrying out the responsibilities of a citizen in democratic societies, where the population should be aware of what their selected representatives are doing and planning."

He added that the Wikileaks revelations have advanced this awareness and understanding, and therefore are are a valuable contribution.