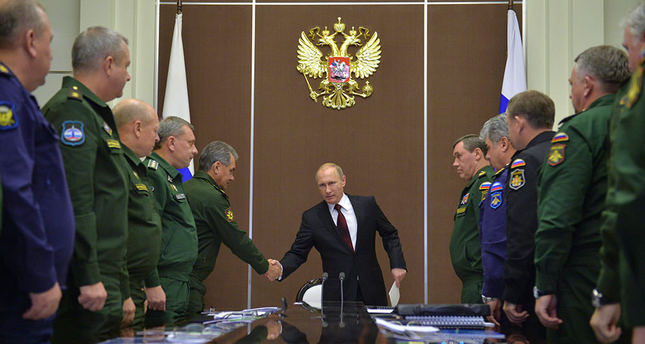 Despite NATO and the West’s criticism, Russia continues to exert its authority in break-away territories of former Soviet states by expanding the role of the military in foreign policy issues

Russia is expanding its authority over separatist regions in the former Soviet republic like Ukraine, Georgia and Moldova in an effort to revive the old glory of Soviet Russia as an affront to the West. As these countries deal with separatist movements to a greater extent, Russia continues to tighten its ties with these break-away territories. In response, Russia is expanding its military capabilities in these separatist enclaves as part of its expansionist aspirations.

The annexation of Crimea and its support for the violent separatist uprising in eastern Ukraine proves Russia's dominant role in these rebel-held regions.

Apart from NATO-controlled regions, South Yemen on Tuesday demanded that Russia supports its separatist movement in order to gain independence from the north. "We strongly urge Russia to adopt the issue of south Yemen as quickly as possible," said the separatist group in a letter to the Russian consulate in Aden. South Yemen and Russia enjoyed a strong relationship during the Cold War as Russia provided significant support to southern Yemeni separatist groups before the unification of Yemen in 1990.

Russia is continuing to expand its sphere of influence over ex-Soviet state Georgia by building closer economic and military ties with the Russia-backed separatist region, Abkhazia. Recently, a new integration treaty was signed between Russia and Abkhazia. Moscow's aim is to strengthen its military presence thus expand its sphere of influence over the self-proclaimed independent region. In addition to Russian military and economic assistance given to the separatist enclave, the treaty would also provide Abkhazians the ability to obtain Russian citizenship.

Russia and self-proclaimed South Ossetia signed the treaty, which is still in effect today, in September 2008 in an effort to improve mutual cooperation, thus deepening ties between the separatist enclave and Moscow government in defiance of the pro-Western Georgian government.

After the dissolution of the Soviet Union there has been strained relations between the former Soviet republic of Georgia and Russia. Relations became tense in 2008 after Russia went to war with Georgia after they decided to break away from Russian rule. Since then, Russia has provided significant backing and support to separatists in self-proclaimed autonomous regions while enhancing its influence over these separatist regions.

Since the Russian invasion of Abkhazia, Russia has maintained a dominant role over the region's foreign and economic affairs. The break-away region Abkhazia, with its population of 240,000, became dependent on Russia for security and economic aid.

The Donbass region covering the Donetsk and Luhansk oblasts of Ukraine was declared the Donetsk and Luhansk People's Republic by pro-Russian separatists after a referendum on May 11. Russia has long been accused of increasing military reinforcements in the Donbass region of eastern Ukraine. The West condemned Russian military reinforcements sent to the restive east in an effort to hold onto its influence over the separatists. The continuing Russian incursion into Ukrainian territory is seen as a violation of Ukraine's territorial integrity, while straining tension between the West and Russia.

The Donbass region has been significant in the history of relations with neighboring Rostov Oblast in Russia, as the majority of the population feels ethnically related to Russia. The city of Donetsk, where tension still remains high, has been named the unofficial capital of the region.

Since the Russian annexation of the Crimean peninsula in March, Russia has been expanding its military build-up in the region. In addition to the existing Russian military presence, Russia's Defense Ministry announced on Wednesday more military deployment to Crimea including a batch of 14 military jets in an effort to gain massive control over the peninsula. The U.S. Supreme Allied Commander Philip Breedlove voiced his concern over covert Russian infiltration in the region saying, "We are very concerned with the militarization of Crimea." "The capabilities that are being installed in Crimea ... are able to exert influence over the entire Black Sea," he added.

The referendum on the status of Crimea held on March 16, 2014, allowed Crimea to secede from Ukraine. Following the referendum, Russia approved a draft bill that recognizes Ukraine's autonomous region of Crimea as an independent state. The United Nations General Assembly Resolution 68/262 on Ukraine's territorial integrity condemned the referendum while only recognizing Crimea within Ukraine's borders.

Moldova is another former Soviet state over which Russia wants to exert its influence. Russia is continuing to display its authority over the breakaway territory known as Transnistria through military deployments to keep the region under its control. The region gained its autonomy after the heavy conflict between ethnic Russians and the central government erupted in 1992. Since then, Russia has deployed troops in the region with the stated aim of protecting fellow Russians from possible armed conflict. A total of 200,000 people living in the region are ethnic Russians and hold Russian citizenship. The Transnistria region demanded a referendum be held to see the country annexed by Russia as many residents of Russian descent favor Russian accession – a sentiment the Moldovan government harshly denies.

NATO has continued to raise its concern over Russian expansionist aspirations in the pro-Russian separatist regions that were formerly satellites of the Soviet Republic. Despite NATO's presence and the West's financial sanctions on Russian firms and individuals, Russia continues to exert its military and economic influence to expand Russian authority.

"If we see these actions taking place in a NATO nation and we are able to attribute them to an aggressor nation that is Article 5. Now, it is a military response," U.S. commander Breedlove said in an interview with the German newspaper Die Welt, as reported by Reuters, in response to Russian expansionist policies over the NATO-controlled region.