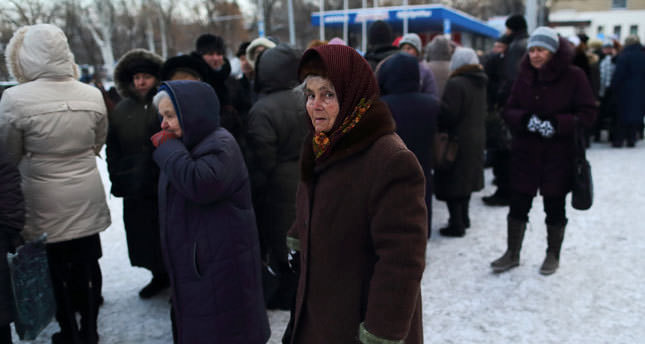 by Dec 05, 2014 12:00 am
Amid ongoing crisis in Ukraine, many Ukrainians chose to migrate to European countries in order to live in better living standards. The reports shows that Ukrainians were the biggest single group of non-EU citizens granted residency permits by EU members in 2013. Most have fled to other areas of Ukraine but some have gone further afield, with thousands seeking a new life in Russia and, increasingly, Europe.

According to several legal and illegal migrants who spoke to Reuters, many are coming via gangs in Poland, the Baltics and Ukraine that offer fake or doctored EU documents for several thousand dollars, plus the option of transport to Western Europe where spot document checks are extremely rare.

According to Eurostat, 236,700 Ukrainians were granted residency permits by EU states last year, and 171,800 of those permits were granted in Poland, one of the main routes for Ukrainians to travel to Western Europe. Popular destinations for Ukrainians include Germany, Italy, Spain and Portugal. Britain's attractiveness is dampened by more stringent border controls than other EU countries.

Andriy left his home town in western Ukraine earlier this year on a journey that brought him through the hands of shady traders in Poland to one of the world's booming markets for illegal immigrants - London.

Fleeing the strife of war with Russian-backed fighters and a shattered economy, Andriy is following a path similar to one taken by thousands of his fellow Ukrainians who have travelled either eastward to Russia or westward to the European Union.

"I don't want to fight in any war," said Andriy, who spoke on the condition neither his surname nor home town would be published because of fear that he could be deported.

The nineteen-year-old, speaking in Russian because his English is limited, added: "I don't want to die - I want to live. I just want a normal life."
More than 4,300 combatants and civilians have been killed in eastern Ukraine since pro-Russian rebels seized border regions in April. Nearly a million people have fled the area, with a surge in the past two months.

The flows abroad are modest compared to the exodus during the 1991 fall of the Soviet Union or the Jewish emigration that helped populate New York's Brighton Beach, but stories such as Andriy's give a sense of the turmoil sowed by the crisis.

Some men are driven to leave by the fear of being called up into the poorly equipped Ukrainian army that is fighting the Russian-backed rebels.
For many other migrants, finding acceptably paid work is the overriding reason to travel. Their voices are silent in European discourse, but illegal migrants such as Andriy are cast by some politicians as the enemies of hardworking European voters.

The migrants thrive in a taxless underworld that is flush with demand and cash. Andriy has no intention of returning to Ukraine because demand for his decorating and repair services is high in London's booming property market.

The cash he can earn in Britain - often more than several hundred pounds a week - far outstrips what he could earn in Ukraine's near-bankrupt $135 billion economy.

For some Ukrainians the turmoil stoked by the Russian-backed insurgents is the final straw in a wider disenchantment with the day-to-day reality of corrupt elites, economic collapse and violence that has followed the collapse of the Soviet Union.

Reuters has seen one of the doctored documents used as identification by migrants, who said Poland was the door to freedom for many.

With the correct documents, a Ukrainian living in the European Union could legally seek work, pay tax, open a bank account and travel home.

Without the correct documents, migrants in Europe are forced to work around the law. As a result many spend years apart from their children who benefit from their earnings but not their presence. "Migrants come for a better life but there are some heartbreaking situations: Mothers who have left their children in Ukraine and communicate by Skype," said Andy Hunder, director of the Ukrainian Institute in London. "They feed their children but to feed them they must leave them," he said.