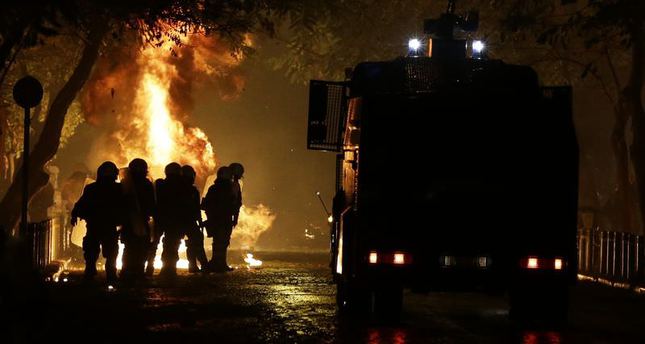 by AA Dec 07, 2014 12:00 am
Demonstrations in central Athens turned violent on Saturday afternoon, and 296 people were detained by police, police sources said.

Thousands had marched for the second time that day to commemorate the police shooting of 15-year-old Alexis Grigoropoulos, and in support of jailed anarchist Nikos Romanos.

The first protest march earlier in the day was peaceful, but protestors in the second march turned violent, setting fires to dumpsters, breaking shop windows, smashing marble stonework on buildings and vandalizing bus stops and phone booths. A car was also set on fire in the Exarchia district.

Central Athens resembled a battlefield with limited vision due to Molotov cocktails and other homemade weapons used by demonstrators, as well as tear gas used by police. After 9 p.m. local time (1900GMT), groups of people headed towards the National Technical University of Athens in Exarchia, where vandalism and fires continued.

Of the 296 demonstrators detained by police, 43 were arrested. Twelve policemen were also injured in the violence.

The demonstration took place on the anniversary of the Grigoropoulos shooting. Nikos Romanos was a friend of Grigoropoulos, and he witnessed the shooting.

Romanos became a symbol of rage against authority, despite the fact that he was convicted for robbing a bank. Romanos has been on a hunger strike for 28 days, because he has not been allowed to attend university classes.