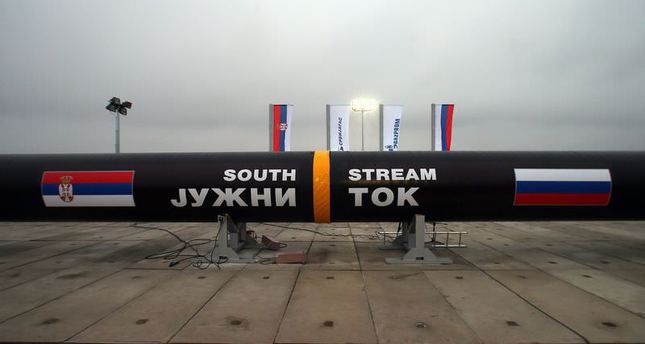 The construction of a new pipeline to Turkey across the Black Sea bed was announced on Dec. 1 during Russian president Vladimir Putin's state visit to Turkey. The new Turkish pipeline is to replace the South Stream pipeline to Europe via the Balkans, which Russian authorities have decided to renounce. Russia is seeking an alternative route to the pipeline that runs through troubled Ukraine to bring its gas to Europe.

Gazprom and the Turkish company Botaş are negotiating to cooperate in the construction of the Black Sea pipeline which will have the capacity to deliver 63 billion cubic meters of natural gas annually, a capability equal to that of the South Stream pipeline. Of this volume, 14 billion cubic meters would be provided to Turkey, with the remaining amount, approximately 50 billion cubic meters, to be delivered to the border of Turkey and Greece.

Energy and Natural Resources Minister Taner Yıldız answered the questions of press members together with World Energy Council Chairman Marie-Jose Nadeau after the Protocol Signing Ceremony of the 23rd World Energy Congress, which will be hosted by Turkey in 2016. When questioned on his thoughts on the reactions of E.U. countries on the cancellation of the South Stream Project, Yılız stated that such developments would not have an affect on Turkey's relations with any Western country, given Turkey's strong stance and geography, adding, "We are not a country that would cancel relations with a country just because we establish relations with another."

Noting that Turkey and Russia are valuable to each other, Yıldız highlighted the fact that Russian President Vladimir Putin's statements only concerned the E.U. and Russia, and not Turkey. Yıldız stated that Turkey has signed a good will agreement for a potential project to be developed in the Thrace region related with the South Stream Project, and that was Turkey's only concern. "The project which Turkey is a part of is TANAP, and we are not a partner of the South Stream currently, although European countries are. For example, Germany receives 55 billion meter cubes of Russian gas through North Stream. Therefore, they have to resolve this problem among themselves," said Yıldız. He further added that while no discussions have taken place in terms of energy in any future projects, Turkey will continue its positive stance.

In reply to a question about the discount to be applied to Russian natural gas, Yıldız noted that the authorities of Gazprom will be visiting Turkey within the next two days, and that he believes much will be achieved in these discussions. Turkey expects the 2015 discount to become clear by the end of the year, and Yıldız announced that the volume purchased will not be less than that of this year.

On the decrease in crude oil prices Yıldız touched on the volatility in the market and added, "The current prices which are around $67 to $70 are advantageous for Turkey, and such low prices in the global markets are reflected in the oil products in Turkey, thus, the daily lives of our citizens." Yıldız also underlined the fact that the International Energy Agency had predicted the price to be around $140 two years ago, and therefore it is not easy to depend on such predictions, and it is better to be realistic and cautious. "If the price of crude oil falls to $43, then all investments related with crude oil will stop, and production would stop. Then as a result, demand would decrease and in the end, prices would go up again.

The energy minister also highlighted that while any kind of decrease in global prices is immediately reflected in Turkish prices, as in the last 5.5 months when there was a discount of around $6 billion, what is more important is achieving a sustainable price.