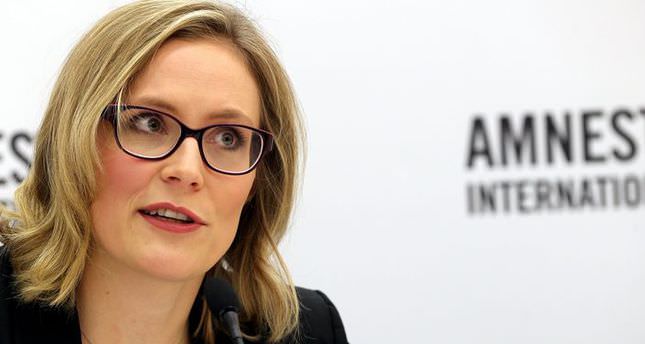 by AA Dec 10, 2014 12:00 am
Several EU member states helped the Central Intelligence Agency and other U.S. authorities in a program of rendition, torture and the secret detention of people as "terror" suspects by the U.S., according to Amnesty International.

The revelations by the human rights organization came on Wednesday after the U.S. Senate Intelligence Committee released a report which disclosed the CIA tortured people it had detained in a brutal manner, which led to scant intelligence information of any value.

Erika Guevara Rosas, Americas Director at Amnesty International, said in a press release: "This report provides yet more damning detail of some of the human rights violations that were authorized by the highest authorities in the U.S.A. after 9/11."

"Despite much evidence having been in the public realm for years, no one has been brought to justice for authorizing or carrying out the acts in these CIA programmes.''

The Senate committee's report summary detailed how the CIA used techniques such as "waterboarding" - to simulate the sensation of drowning in a victim - mock execution, sexual threats and other forms of torture and degrading treatment against detainees who had been forcibly "disappeared".

The effects of the techniques and detention conditions led to detainees suffering "hallucinations, paranoia, insomnia and attempts at self-harm and self-mutilation", the report revealed.

Amnesty International said in its report that Italy, Lithuania, Romania, Sweden, and the UK were among EU states which worked with U.S. intelligence agents in carrying out the detention and torture program.

Rosas added: "The declassified information contained in the (report's) summary, while limited, is a reminder to the world of the utter failure of the U.S.A. to end the impunity enjoyed by those who authorized and used torture and other ill-treatment."

"This is a wake-up call to the U.S.A.; they must disclose the full truth about the human rights violations, hold perpetrators accountable and ensure justice for the victims."

"This is not a policy nicety, it is a requirement under international law," he said.

Ben Emmerson, the United Nations Special Rapporteur on Counter Terrorism and Human Rights, said the Senate report had confirmed what the international community had long believed-that there was a clear policy orchestrated at a high level within the administration of George W. Bush which allowed gross violations of international human rights law to be committed.

Emmerson said in a statement: "The individuals responsible for the criminal conspiracy revealed in today's report must be brought to justice, and must face criminal penalties commensurate with the gravity of their crimes."

"Now it is time to take action."

The report, released on Tuesday, found that CIA officials had misled the U.S. Administration, Justice Department, Congress and the U.S. public over its torture program, which had been more brutal and ineffective than they had disclosed.

The European Parliament called on EU member states to investigate their roles in the operations in 2012 and 2013.

Governments which allegedly colluded with the CIA have an obligation under international human rights law to ensure an independent, impartial, thorough and effective investigation is carried out, according to the organization.

EU's foreign policy chief Federica Mogherini said in a statement on Wednesday that "much remains to do" in tackling the use of torture.

She said: ''The Convention against Torture was adopted by the UN 30 years ago today, and yet torture is still widely practiced around the world. This demands our urgent attention."