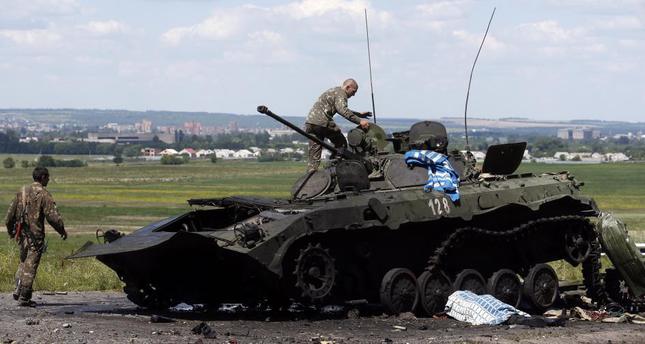 by Daily Sabah Dec 13, 2014 12:00 am
Ukraine's project to build a defensive wall to prevent further Russian infiltration into rebel-held areas continues in the face of Moscow's condemnations, amid Russia's efforts to support separatists groups in eastern Ukraine.

Ukraine's wall project, dubbed "European bulwark," is the second wall in Europe. The wall project consists of the construction of two defensive lines, as planned by Ukrainians authorities. The 2,000-kilometer-long wall is expected to tighten security along the Russian border, which stretches for 2,295 kilometers. Ukrainian Prime Minister Arseniy Yatsenyuk announced the draft plan, named "Wall," in early September in an effort to protect the Ukrainian border. The wall is planned to stretch across Kharkiv, Chernihiv and Sumy oblasts, as well as the northern part of Luhansk Oblast, where pro-Russian rebels have gained greater control over the territories in the east of the country.

As the ceasefire continues on volatile ground, Ukrainian President Petro Poroshenko is looking for tentative steps toward a resolution for the crisis that prevails in the embattled east of the country. With no fighting reported in the east of the country on Tuesday, the Ukrainian president said that the fragile ceasefire has become "real."

"I have positive news. Today is the first 24 hours for seven months ... when we have had a real ceasefire in Ukraine," he said in a speech during a trip to Australia on Friday. "You simply can't imagine how important it is for me. This is the first night where I don't have either a lost or wounded Ukrainian soldier," he added.

As no incident was reported for almost 24 hours, Poroshenko stated that the situation could lead to a return of peace and stability in the violence-hit eastern Ukraine. "Everything is so fragile. But I pray that we should continue this process," he said.

"If we stay united we will win, no doubt. Not win by military means, but we will launch political dialogue, bring peace, and bring stability to my nation, to the continent and to the whole world." Since the ceasefire took effect on Sept. 5, both sides have accused each other of violating the proposed peace plan, which has been held on volatile ground with dozens of violations reported in the eastern city of Donetsk and the war-ravaged Lugansk region, where rebels hold the main city.

A "day of silence" was declared on Thursday in the restive region in an attempt to forge a sustainable ceasefire, which Ukraine hopes will turn into a new round of peace talks. However, sporadic fighting was reported to have continued in the east after the Ukrainian military accused separatists of violating the one-day truce.

The Moscow-influenced separatist conflict in eastern Ukraine is yet to be settled despite attempts to put an end to the violent clashes between Ukrainian government forces and Russian-backed separatist. However, no peaceful and permanent resolution has been agreed on so far, as the situation in the east of the country worsens throughout the months-long conflict. Truce talks have not produced a breakthrough over the settlement of the crisis in Ukraine. The peace resolution that was agreed under the Minsk protocol of Sept. 5 and the Minsk memorandum of Sept. 19 has reportedly been violated many times. The constant fighting in eastern Ukraine has delayed a peace deal.