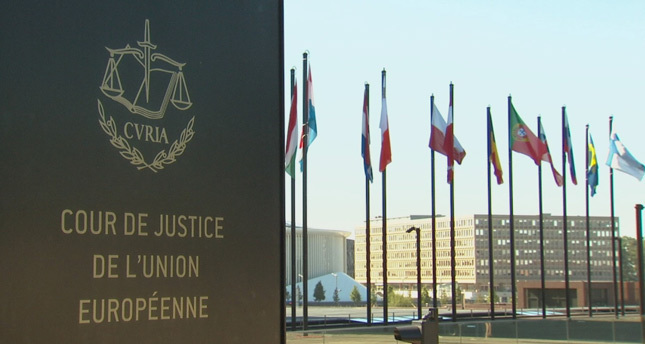 by Daily Sabah Dec 18, 2014 12:00 am
The European Union's second highest court annulled the bloc's decision to keep Hamas on the list of terrorist organizations yesterday, after Hamas appealed its label over four years ago. The Luxemburg-based court ruled that a funding freeze from being blacklisted would continue for three months or until an appeal was closed, claiming that the disputed results were not based on an examination of Hamas's acts but on accusations obtained from the media and the Internet. In a statement, the court said that taking Hamas off the list was a decision made on "procedural grounds."

The court said the decision is not implying 'any substantive assessment of the question of the classification of Hamas as a terrorist group.'

After the attacks on September 11, Hamas's military wing was added to the EU's blacklist in 2001, but the political wing was blacklisted two years later.

Since 2003, Hamas has been labeled as a terrorist organization by the United States, the United Kingdom, Australia, Canada, Egypt and, of course, Israel. Hamas, meaning 'enthusiasm' in Arabic, originated as a resistance group in 1987 as a branch from the Muslim Brotherhood, with the main mandate of liberating Palestine from Israeli occupation. Despite Israel having an army with a budget of $16 billion, Hamas has been constantly accused of causing terror in Israeli-occupied Palestine.

The EU's court decision comes at a time when members of the union are beginning to recognize Palestine as a state in an attempt to commence peace talks. Countries like France, Spain and Sweden have passed motions calling for their governments to acknowledge Palestinian statehood— something the U.S. and Israel consider "unilateral" and harmful.

U.S. Secretary of State, John Kerry, is leading peace talks once again between Israeli Prime Minister Benjamin Netanyahu, and Palestinian Authority President Mahmoud Abbas. Dialogue is only taking place with Abbas, a member of the secular Fatah party, which has delayed the possibility of a solution because Hamas was excluded from the talks— something that was expected, considering it was labeled as a terrorist organization, remaining unrecognized as a government by the EU and the U.S., even after its majority win in 2006. The Palestinian national unity government was formed in June following a reconciliation deal between Hamas and rival Palestinian faction Fatah. The government has yet to assume control of the Gaza Strip, however, which has been administered by Hamas since 2007.

Though the Israeli prime minister says Hamas only wants the "destruction of Israel," the group has affirmed that it may agree to a 10-year truce if Israel extracts to the 1967 borders and permits Palestinian refugees from 1948 to return. Hamas has been resisting against the Israeli attacks on Gaza Strip for more than a decade. In the last Israeli attacks on Gaza in the last summer, Hamas vowed to defend the lands and urged the international community to stop Israeli aggression. In the last attack, Israel killed more than 2,000 people and wounded thousands. Also, more than 18,000 homes were destroyed.