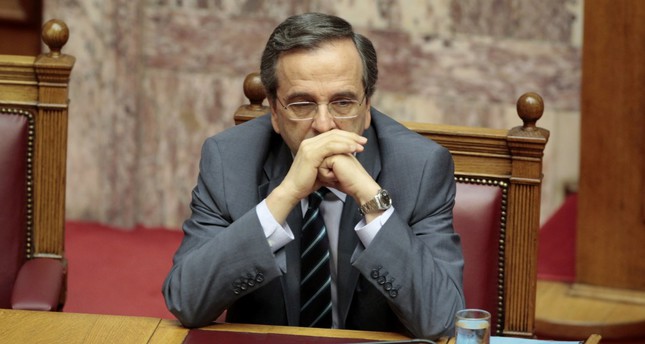 by Dec 24, 2014 12:00 am
Greek Prime Minister Antonis Samaras said on Tuesday he hoped to avoid a snap general election next year after an improved result for his candidate in the second round of a parliamentary vote to elect a new president.. As expected, Greek lawmakers failed to reach a majority in favour of the official candidate, Stavros Dimas, but an improved total from the first round left government lawmakers more optimistic ahead of the decisive final round on Dec. 29.

Dimas won 168 votes in the 300-seat parliament, 12 short of the 180 he will need to be elected next week. It was eight more than he scored in the first ballot last week. If he misses the threshold, snap elections will be held, potentially handing power to the leftwing Syriza party which wants to renegotiate Greece's international bailout and roll back the austerity policies of recent years.

Samaras, who has offered to bring pro-European independents into his government and hold elections late next year if Dimas is elected, said he was hopeful enough lawmakers would want to avoid a snap poll to ensure success next week. "Everyone will assume their responsibility, the responsibility for the consequences their vote will have on stability and the country's future," he told reporters. Opinion polls show most Greeks do not want snap elections and in the corridors of parliament the mood among deputies in the ruling coalition was visibly improved. But the outcome remains finely balanced. "It is certainly a better result but not sufficient," Education Minister Andreas Loverdos told Reuters. He cautioned that talks between lawmakers over Christmas would have to be fully transparent to avoid any suggestion of illicit deal-making following allegations of attempted bribery last week.

Greek stocks trimmed losses after the vote, with the main Athens index trading 1.6 percent lower. Among independents and smaller parties, where Samaras must find the extra votes, the situation remains fluid as lawmakers weigh up the prospects of facing a general election. Both the Democratic Left, which quit the ruling coalition last year and Independent Greeks, a right-wing anti-bailout party, have said they would not vote for Dimas. But it is unclear how much discipline they can impose and a furious round of lobbying is likely over Christmas. Two Democratic Left lawmakers announced they were leaving the party to sit as independents just minutes before the vote.

Financial markets and Greece's European partners have been watching the presidential election closely, although after the crisis measures of the past two years, most analysts believe there is less risk of contagion, with most Greek debt held by official creditors. Syriza leader Alexis Tspiras, who has struck a more moderate tone, promising to keep Greece in the euro, said he was confident elections would be held in the new year, allowing Greece to "turn a new page". Syriza still leads in opinion polls but its advantage has narrowed over recent weeks. A survey on Saturday gave it a 3.4 point lead.