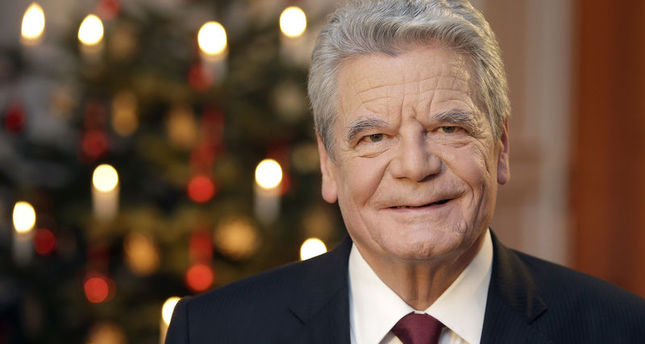 by Dec 24, 2014 12:00 am
President Joachim Gauck urged Germans to welcome with open arms the hundreds of thousands of people fleeing war zones and to reject anti-immigrant populism.

Gauck used his annual Christmas address, to be delivered on national TV on Thursday, to praise Germans who sheltered and supported some 200,000 new refugees this year and to indirectly attack a new anti-asylum movement.

More than 17,000 people took part in Germany's largest anti-immigrant rally on Monday in the eastern city of Dresden to air their claims that Germany is being overrun by Muslims.

"If our eyes are wide with fear, answers are hard to find," Gauck said after the grass-roots movement that calls itself PEGIDA -- or Patriotic Europeans Against the Islamisation of the West -- staged its 10th straight weekly rally on Monday.

Gauck, a former pastor and human rights campaigner in communist East Germany, has held the office with its ceremonial duties and limited executive powers since March 2012. He has no party affiliation and often speaks more bluntly than his predecessors.

Praising a group in Magdeburg that cares for young orphans stranded in Germany, he said: "For me, the fact that we're responding with empathy to the suffering around us, that the vast majority of us don't share the views of those who want to seal Germany off, is a truly encouraging lesson learnt this year."

The PEGIDA rallies have unsettled a political establishment that has spent decades trying to restore Germany's image as an open, tolerant country after the devastation of the Nazi era.

The number of asylum-seekers arriving in Germany has surged to some 200,000 this year -- double that in 2013, four times the 2012 level, and more than any other western country. Tens of thousands of Germans are also privately taking in refugees.

German asylum rules are among the most liberal in the world, partly because asylum granted elsewhere helped many such as former Chancellor Willy Brandt to survive the Nazi regime.

"We know that fears will always accompany us," said Gauck. "But we also know that putting into practice what we call humanity is indeed the greatest capacity humankind has."