Ukraine on path to NATO membership 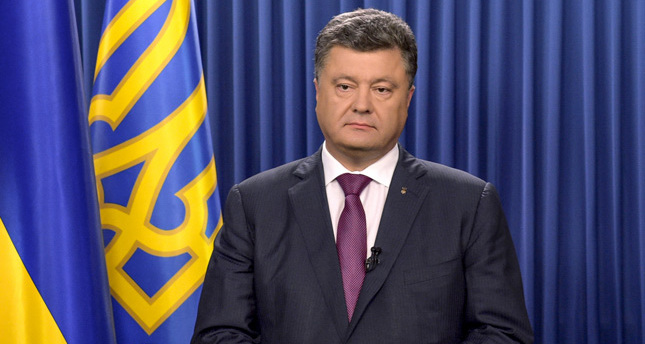 by Daily Sabah Dec 24, 2014 12:00 am
The Ukrainian parliament passed a law proposed by Ukrainian President Petro Poroshenko on Tuesday in a bid for NATO membership. The country's long-term non-aligned status was renounced after the law was backed by 303 lawmakers out of a total of 450. The law envisages "the abandonment of the non-bloc status and a return to NATO rapprochement that will significantly increase Ukraine's positions in defense," as reported by the state-run Russian Itar-tass news agency.

"Our door is open and Ukraine will become a member of NATO if it so requests and fulfils the standards and adheres to the necessary principles," a NATO spokesman in Brussels said, according to Reuters.

Responding to Russian aggression in former Soviet states like Georgia and Moldova, Ukraine applied to join the NATO Membership Action Plan in 2008. After the election of Viktor Yanukovych as president in 2010, Ukraine remained a non-aligned state until the crisis in eastern Ukraine erupted in March after the Russian annexation of Crimea. Since then, Ukraine considers Russia a main threat to its territorial integrity and sovereignty.

Russia considers Ukraine's NATO membership a national security threat to its borders and its eastward expansion angers Russian authorities. Regarding Ukraine's renunciation of its neutral military and political status through taking steps to join NATO, Russian Foreign Minister Sergei Lavrov said: "It will only escalate the confrontation and creates the illusion that it is possible to resolve Ukraine's deep internal crisis by passing such laws," as reported by Itar-tass. He said that Ukraine's possible NATO membership would be a "counterproductive" step to ease the already strained tension between Ukraine and Russia.

"[Ukraine's move] is certainly the evidence of orientation; what authorities in Kiev plan to do," Russia's ambassador to the Organization for Security and Cooperation in Europe (OSCE), Andrey Kelin, said during a Moscow-Vienna videoconference on Tuesday. "This is an unfriendly step toward us, particularly in the current situation," he added, stressing that it would likely deteriorate the tenuous peace agreement over the crisis in Ukraine.

Meanwhile, a meeting of the Contact Group, including Ukrainian and Russian officials and pro-Russian separatists over settlement of the current tense situation in eastern Ukraine is expected to be held in Minsk, Belarus again this week. However, no exact date has been given so far.

The Moscow-influenced separatist conflict in eastern Ukraine has not been settled despite some attempts to put an end to violent clashes between Ukrainian government forces and Russian-backed separatist. However, no peaceful and permanent resolution has been agreed upon so far, and the situation in the east of the country has worsened throughout the months-long conflict. Truce talks could not produce a breakthrough over issues relating to the settlement of the crisis in Ukraine. The cease-fire that was agreed upon in the Minsk Protocol of Sept. 5 and the Minsk Memorandum of Sept. 19 have been reportedly violated many times. The constant battle in eastern Ukraine is serving to imperil the peace deal that was intended to end the violent conflict.