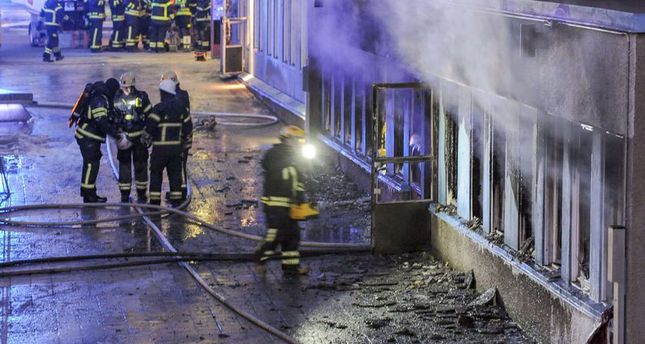 by Dec 25, 2014 12:00 am
An arsonist set fire to a mosque in the Swedish town of Eskilstuna on Thursday, injuring five people, police said, an incident which comes amid an intense debate over immigration.

The immigration debate has pitted the far right, which wants to cut the number of asylum seekers allowed into Sweden by 90 percent, against mainstream parties intent on preserving the Nordic country's liberal policy.

Between 15 and 20 people were in the mosque, located in the ground floor of a building in a mainly residential area, when the fire erupted. Local media footage showed smoke and flames billowing from the windows.

"A witness saw somebody throw an object through the window of the building, which serves as a mosque, after which a violent fire began," police spokesman Lars Franzell said.

The five injured people were taken to hospital for treatment of injuries ranging from smoke inhalation to lacerations. No suspect has been apprehended yet, Franzell added.

Emergency services in Eskilstuna, central Sweden, were called to the scene of the fire shortly after 1200 GMT, and police are treating it as arson.