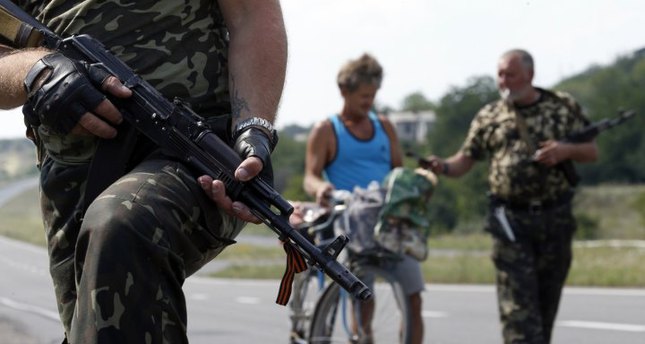 Civilians have become victims in the ongoing conflict in eastern Ukraine. The U.N. has revealed that, in the worst cases of human suffering, more than 5 million people have been affected by the crisis

The suffering of civilians from the months-long crisis in eastern Ukraine reveals the worsening humanitarian situation in the region as the number of those killed and wounded has reached to more than 15,000 in total as of December 16, according to U.N. figures. The number of people affected is reportedly 5.2 million, including 2 million children. No one knows the number of those missing.

Despite a new fragile cease-fire agreement announced on December 9, heavy shelling has continued to kill more people in the pro-Russian rebel-held Donbass region. Ukrainians have been suffering from the months-long clashes in the east of the country.

Civilians have been heavily affected by the violence and the number of internally displaced people (IDP) will gradually increase if the war continues. The total number of IDPs in Ukraine has reached 542,080, the U.N. report said, and the number of displaced children has hit 130,274 as of December 16. According to August reports, only 102,600 Ukrainians were internally displaced, yet continuing displacement has led to more people living under deplorable humanitarian conditions. In addition to IDPs, a large number of people sought to go and stay in neighboring countries like Russia, Belarus, Poland, Slovakia, Hungary and Moldova, with 597,956 affected Ukrainians in total.

The clashes between Ukrainian security forces and pro-Russian separatists have turned the east of the country into a battle zone where many Ukrainians have been forced to flee the war to other parts of the country or to cross into neighboring Russia. For those who have stayed, the humanitarian situation has gotten worse since the "anti-terrorist operation," launched by Kiev several months ago. Basic services and infrastructure have been heavily affected by the violence and houses and buildings have been destroyed during heavy clashes.

"As of November 29, 34 settlements in the Donetsk region remained without electricity. In the Luhansk region, the settlements of Yuvileine, Novosvitlivka and Stanytsia Luhanska reportedly did not have electricity for up to six months. Energy shortages may also affect the entire country during winter if the supply system is additionally stressed, for example the accident in the nuclear power station in Zaporizhzhia on November 28," the U.N. report said.

"When things quietened down in September, the level of destruction was so staggering it reminded me of the Chechen capital of Grozny in 2000, the most iconic image of post-Soviet war wreckage of the 21st century. Some neighborhoods were razed completely; others were barely inhabitable," Tanya Lokshina, a Russia program director at the U.K.-based human rights organization Human Rights Watch (HRW), said.

"As both sides engaged in the war fail to respect their obligation to minimize civilian harm, at least 10,000 civilians in the devastated town take the brunt of the fighting. Several residents of a wrecked nine-story building told us how the building was shelled in late November, and how when a repairman tried to fix the electricity in the parts of the building still standing the next morning, he was killed in a new wave of shelling," she added, revealing the human suffering in violence-hit regions in eastern Ukraine.

Following pro-Russian rebels self-proclaiming the existence of the Donetsk People's Republic in April, instability has prevailed in eastern Ukraine. After declaring their independence, clashes have increased throughout the region where government forces have stepped up operations. The conflict has come at the cost of an increasingly high death toll.