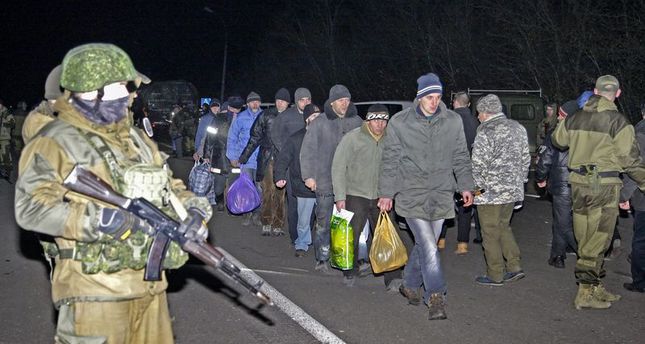 by Dec 26, 2014 12:00 am
After fraught negotiations, a long-awaited exchange of prisoners between government forces and the pro-Russian rebels of the self-proclaimed Donetsk People's Republic finally took place on Friday night.

On the rebel side, 146 Ukrainian troops -- a little off the agreed number of 150 -- were transported to the drop-off point from the separatist stronghold of Donetsk in a snaking column of civilian buses and military trucks.

Dressed in civilian clothes with some clutching plastic bags of possessions, they were lined up by the rebels, stamping their feet to keep warm as they waited for their names to be read out.

In groups of ten, the insurgents and the government forces counted out the prisoners and sent them over to the other side.

As they listened out for their turn to come, some of the Ukrainian military personnel could barely believe what was happening.

"They only just told us that this would happen," said Artyom Syurik, 28, a medic with the interior ministry troops who was captured four months ago. "I am glad to be going home."

"It is good that it is before New Year," he said, adding that he was held in reasonable conditions. "I am looking forward to seeing my parents and wife. They don't know I am coming."

Standing next to him, infantry soldier Valentin Ranivskiy said the troops that captured him at the height of the fighting in August were from a paratrooper battalion of the Russian army.

"That's how they presented themselves at least," he said.

One of the men, Alexei Samsonov, who was born in Russia, said he just wanted to go back to his native country.

"All of my relatives are in Russia," he said, the hood of his jacket up. "I consider what the Ukrainian army is doing not to be right."

Coming in the other direction were more people -- 222 men and women -- that the rebels said Ukraine was holding as prisoners of war.

"After five months of being in jail I feel crappy," said rebel fighter Pavel Korokosov, after clambering up onto the back of a waiting truck.

"They just brought us here with out hands tied and tape over our eyes."

Others were simply thinking about what they hoped to do first when they got to their own territory.

"I want to eat fried potatoes and talk to my relatives," said Denis Balbukov.

"It was alright once we were moved to the detention centre, but to begin with, they really tormented and roughed us up."

But while some said that they would return to battling Ukraine, others claimed that they had never been involved in the fighting in the first place.

"They just wanted people to exchange for their soldiers so they detained anyone," said middle-aged Tatyana from the seaside town of Mariupol.