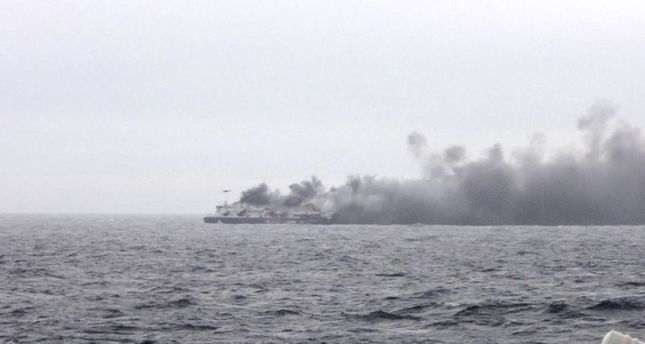 At least seven people died after a car ferry caught fire in the Adriatic Sea, Greek and Italian officials said Monday, as survivors described a terrifying ordeal that could easily have been much more deadly.

Six bodies were recovered from the water around the stricken Norman Atlantic on Monday, a day after the body of a 62-year-old Greek man was pulled from the heaving sea.

A 24-hour evacuation operation that proved to be extremely difficult was concluded shortly after midday with the Italian navy saying only a skeleton crew of nine men had been left on board to prepare for the boat being towed to port.

Wrapped in blankets and with many of them sporting bandages, 49 of the 478 passengers and crew who were on board the ferry when it caught fire shortly after dawn on Sunday disembarked from the merchant ship "Spirit of Pireus" at the Italian port of Bari.

They and other evacuees told how the fire triggered panic which the crew appeared ill-prepared to deal with.

One of the first passengers off in Bari told reporters he had thought he was going to die as parts of the boat became engulfed by thick smoke as the ferry was travelling from Greece from Italy.

"We did not know what to do. The staff had no idea how to get people off the boat," he said.

"The lifeboats did not work, there was only one of them in the water and none of the crew were there to help people."

The evacuation was completed nearly 36 hours after a fire broke out on the car deck and left the huge vessel drifting dangerously in high seas off the coast of Albania.

With a second navy boat at the scene and able to provide a landing deck for helicopters, the pace of the evacuation accelerated significantly on Monday.

With the evacuation complete, questions began to be asked about how the fire started and why it was not contained.

Bari prosecutor Giuseppe Volpe announced a criminal investigation which will seek to establish whether negligence contributed to the disaster.


The Italian owner of the boat, Carlo Visentini, said he would cooperate fully.

He insisted that the vessel, which was leased to Greek operator ANEK ferries, had passed a technical inspection which included its firedoors on December 19.

The body of the Greek passenger who died on Sunday was recovered after he and his wife, Teodora Douli, 56, ended up in the water while trying to reach a lifeboat.

She was rescued alive and helicoptered to a hospital at Galatina on Italy's southeastern heel.

"We spent four hours in the water," she said Monday. "I tried to save him but I couldn't. We are dying, we're dying, he told me.

"I watched my husband die," she added in an interview with the Italian news agency ANSA. "He was bleeding through his nose, perhaps because he banged his head on the side of the ship."


Other evacuees were flown to the Greek island of Corfu, where lorry driver Fotis Santakidis described how the smell of the smoke from the fire had woken him in his cabin.

"I ran out. I looked out for a lifejacket but I could not find one," he told Greek newspaper Ethnos.

Athina Pappas, a Greek journalist who was travelling with her husband, added: "Everyone was consumed by panic and nobody was telling us what we had to do."

The Italian navy and coastguard worked through the night trying to get people off a boat that was being buffeted by powerful, bitingly cold winds and huge waves.

Despite their efforts, more than 200 people were still onboard at dawn, having spent 24 hours exposed to the elements in fear of their lives.

The Italian-owned ship, which was travelling from Patras in western Greece to Ancona in Italy, started drifting because the fire put its steering system out of action.

A flotilla of merchant, coastguard and military ships from Greece, Italy and Albania were involved in the rescue efforts.

Some of the rescued passengers displayed mild symptoms of hypothermia but doctors treating the evacuees indicated that they were mainly dealing with shock and trauma.