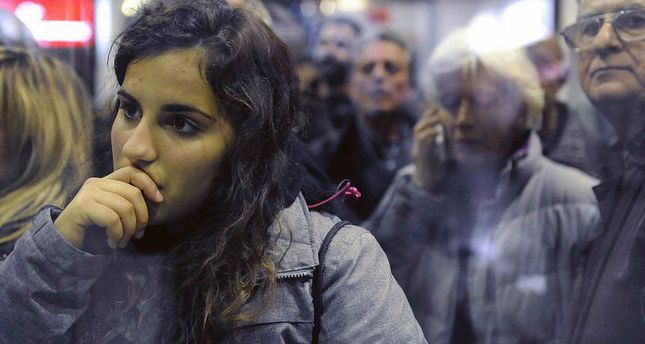 by Dec 30, 2014 12:00 am
The death toll from a ferry fire in the Adriatic rose to 10 on Monday as the search for survivors went on into the night in seas off Albania.


It was unclear how many people had been on board and whether any were still missing, but the Italian navy kept up its search, with almost 40 people still officially unaccounted for.

As the search went on, survivors recounted the terrifying moments that the Norman Atlantic became engulfed by thick smoke in rough seas, forcing many into the chilly waters below.

Italian Transport Minister Maurizio Lupi said that 427 people had been winched to safety by helicopter over the course of a 24-hour rescue operation carried out in an unusually fierce winter storm.

Thirty-eight people were unaccounted for, according to an updated list of passengers and crew from the Greek operator, but there were doubts over the manifest's accuracy.

Lupi said it was unclear if those unaccounted for could include no-shows at boarding or people who got off at a stopover on the Greek island of Igoumenitsa or whether there were errors on the passenger list.

"It is up to the departure port to match up their list and the people (rescued)," Lupi said.

"That is why we are continuing our (search) effort: we cannot know what the exact number was."

"I strongly doubt that all the names on the list are real - we have two persons with the same name, who turned out to be one person," the minister told Mega TV.

None of the statements from survivors have so far suggested the death toll is likely to climb sharply but an empty lifeboat washed up on the shores of Albania, in one possible sign of more bad news to come.


The uncertainty over the scale of the disaster emerged after the evacuation was completed in early afternoon.

Ship captain Argilio Giacomazzi, 62, upheld maritime tradition by ensuring he was the last man off, handing over to Italian navy officers.

His conduct was in marked contrast to that of the last Italian sea captain to make global headlines, Francesco Schettino, the Costa Concordia skipper currently on trial for manslaughter for abandoning a sinking cruise liner on which 32 people died in January 2012.

Wrapped in blankets and with many of them sporting bandages, 49 evacuees arrived at the Italian port of Bari on board a Greek merchant ship that had been part of an international flotilla involved in the rescue operation.

Many of them recounted how the fire triggered chaotic scenes as the crew struggled to cope with the disaster.

One of the first passengers off in Bari told reporters he had thought he was going to die as parts of the ship became engulfed by thick smoke while many passengers were asleep in cabins.

"The lifeboats did not work, there was only one of them in the water and none of the crew were there to help people," he said.

The evacuation was completed nearly 36 hours after a fire broke out on the car deck and left the large vessel drifting dangerously.

Questions are now being asked about how the fire started and why it was not contained. Different accounts of a safety inspection carried out on December 19 have emerged and several survivors reported the car deck as being covered by a film of leaked fuel.

Bari prosecutor Giuseppe Volpe announced a criminal investigation that will seek to establish whether negligence contributed to the disaster. Italian reports said the ship owner and captain could face manslaughter charges.


Teodora Douli, the wife of a Greek passenger who died on Sunday, described how she watched her husband Georgios drown in front of her after they ended up in the water.

"We spent four hours in the water," she said Monday. "I tried to save him but I couldn't. 'We are dying, we're dying', he told me."

In a further twist, the couple's son was asked to identify a corpse that was not his father's following an apparent mix-up.

Other evacuees were flown to the Greek island of Corfu, where lorry driver Fotis Santakidis described how the smell of the smoke from the fire had woken him in his cabin.

"I ran out. I looked out for a lifejacket but I could not find one," he told Greek newspaper Ethnos.