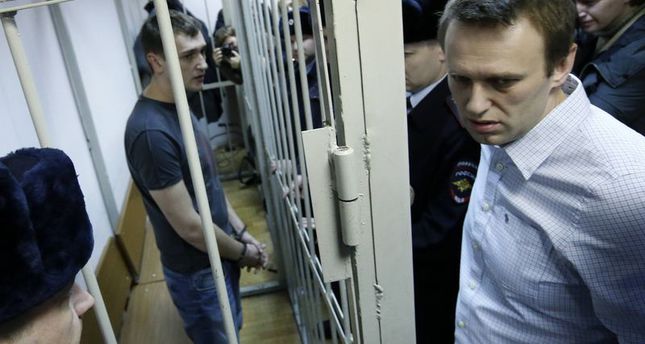 Russia's protest leader Alexei Navalny, who got a suspended sentence but saw his brother sent to jail Tuesday, galvanised the opposition with attacks on President Vladimir Putin and exposed the exorbitant wealth of the elite.

A maverick politician who built a massive support base on the web before rallying tens of thousands against the ruling regime, the 38-year-old has become a top enemy for the Kremlin, with a half dozen criminal cases lodged against him and his allies.

The latest case ended on Tuesday with him and his brother Oleg found guilty of embezzlement and sentenced to three and a half years in jail. But while Navalny's sentence was suspended, his younger brother was ordered to serve the time behind bars -- a verdict that Navalny denounced as a "disgrace" and observers considered an attempt to muzzle him by putting a close relative in Russia's notorious penal system.

After emerging as the key figure in the mass opposition protests that rocked Russia in the winter of 2011-2012, Navalny took second place in Moscow mayoral polls and already dodged jail once when his first sentence of five years was suspended last year.

Tuesday's hearing was abruptly brought forward by two weeks in what observers said was an apparent attempt to thwart brewing protest rallies.


"Navalny is a unique politician of the younger generation who managed to become famous and popular at a time when public politics has ceased to exist," said Nikolai Petrov, a professor at the Higher School of Economics in Moscow.

The latest case against him alleges that he and his brother Oleg embezzled about 27 million rubles (more than half a million dollars at the exchange rate at the time) from the Russian wing of French cosmetics company Yves Rocher.

Other cases against him and his supporters -- part of what he says is a concerted prosecution campaign employing dozens of investigators -- range from his crowd-funded mayoral run, money paid to his firm by an opposition party and even the alleged faking of his licence to practice law.


Navalny has boldly stated an ambition to become president following the 2018 election and prosecute Putin and his allies, whom he accuses of rampant corruption and constant lying.

He coined the phrase "Party of crooks and thieves" from which majority party United Russia has never recovered. His slogan "Do not steal, do not lie" appeals to many as the foundation for a different Russia.

As the media focus turned to events in Ukraine this year and coverage on Navalny dwindled to a trickle due to arrest conditions, he accused Putin of waging war in eastern Ukraine to divert attention from corruption.

"Everything is based on lies," he said in his final statement to the court earlier this month. "These lies have become the mechanism used by the state, they have become the essence of the state."

Navalny's modest upbringing, middle-class lifestyle and lack of ties to the political scene of the 1990s, which many Russians have grown to despise, broaden his appeal.

The political image is reinforced by western-style photoshoots with his two children and wife Yulia, who has been by his side throughout court ordeals and took over his Twitter blog @navalny and its 860,000 followers after he was banned from using the Internet.

He has failed to rally all of Putin's critics however, as some in the opposition accuse him of populism and xenophobia, pointing to his participation in nationalist marches in the past.

Most Russians who get their information from state television know him mostly as a convict in a previous timber fraud case.

In a poll conducted by Levada Centre pollster in September, 48 percent said they know who Navalny was but only 14 percent had a positive view of him.

Navalny began crusading against corruption in state companies in 2007, buying their shares to access company reports and grilling management at annual general meetings.

His Internet-driven projects - Rospil.info and later the Anti-corruption foundation (FBK) - have exposed suspicious state contracts and the luxurious mansions of public officials both in Russia and abroad, by poring over public reports, transactions and real estate databases.


"Because of his campaign against corruption, Navalny has many influential enemies," said Petrov.

Politically, he is one of few self-sufficient public figures "whose popularity does not depend on Putin's," he added.

"If Putin disappeared from the political scene... only very few people would be left standing, including Navalny."