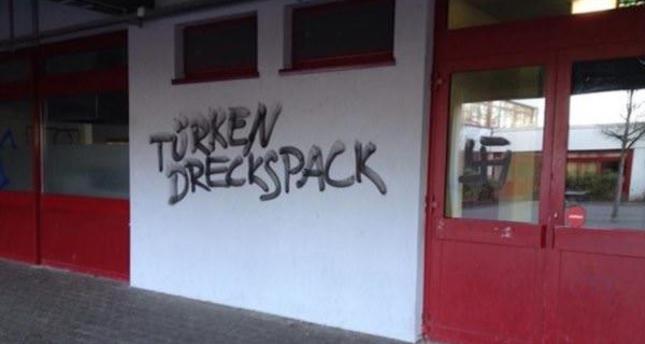 by Daily Sabah Jan 04, 2015 12:00 am
Turks have been specifically targeted in racist slogans and threats written on school walls in the western city of Dormagen in Germany. The threats come as Germany witnesses an increasing number of racist and xenophobic acts against Muslims in recent weeks.

It was reported that the slogans written on the walls of Burg Elementary and Leibniz High School located in Hackenbroich included "Turks cannot be Germans", "Turks will be killed", "Turks are pigs" and "Turks are dirt bags." Swastikas, symbol of the Nazi Party and neo-Nazis worldwide, were also painted on the walls.

Dormagen police official, Dirk Thies, said that the incident was reported on Sunday and local police and Düsseldorf Federal Police are investigating the attack.

Half-built Süleymaniye Mosque in Dormagen, which is administered by Turkish-Islamic Union for Religious Affairs, was also attacked with racist graffiti and slogans on December 21.

A possible link between two attacks is also being investigated.