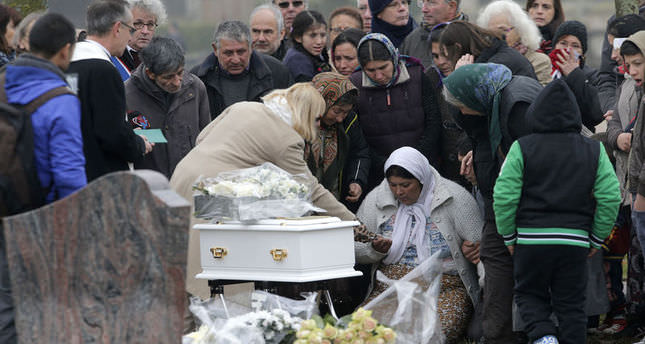 by Daily Sabah Jan 06, 2015 12:00 am
A French mayor's refusal to allow the burial of a Roma migrant's baby has caused growing anger in France. The French human rights ombudsman, together with international human rights organizations, condemned the controversial decision, and launched an investigation into the matter. The family of the two-month old baby girl has demanded a burial at the municipal cemetery. However, the family encountered severe opposition. The mayor of Champlan, a town about 23 kilometers south of Paris, denied allegations that the baby had been refused burial, while showing mercy to the bereaved family. The case has led to the discussion of how badly the Roma people living in France are being treated. "Refusing a child burial because of its roots is an insult to its memory, an insult to France," the French Prime Minister Manuel Valls tweeted.

EU Romani citizens living in France have long experienced "high levels of discrimination, stereotyping and racism that result in serious violations of their human rights" while suffering from multiple expulsions and forced evictions from France. The European Roma Rights Center accused the French government of "hav[ing] a clearly harmful impact on the human rights situation of Roma" due to deplorable living conditions in the informal Romani settlements in France set up by the French government. Two settlements are in Seine-Saint-Denis, in the Ile de France region, and two in the Urban Community of Lille, with two others located in Marseille.

Despite French President François Hollande's more open policies, France has developed a tense relationship with the Roma, who mostly come from Eastern Europe, particularly Bulgaria and Romania. Sarkozy's tough treatment of the Roma still continues, with many Roma people subjected to mass evictions. Prime Minister Valls's integrationist attitude towards Roma migrants is similar to Sarkozy's security policy that aimed to force Roma migrants, who are residents of Romania and Bulgaria, to return to their countries of origin. In 2010, ex-French president Sarkozy, due to concerns about public safety, had ordered the expulsion of illegal Roma migrants who had committed public-order offenses.

"More than four-fifths of EU Romani citizens have been evicted an average of six times in France, and in most cases, French authorities do not respect requirements to conduct social assessments to identify solutions in advance of eviction," according to the report released by the European Roma Rights center on Sept. 14, 2014. "Nearly 30 percent of Roma are only notified on the day they are evicted, which leaves most families on the street: no respondent reported having been offered alternative accommodation or emergency housing. Violence and degrading treatment affected more than two-thirds of evicted EU Romani citizens in France, and termination of education is the most common result for Romani children in school at the time of eviction," said the report, revealing the precarious life conditions for Roma living in France.