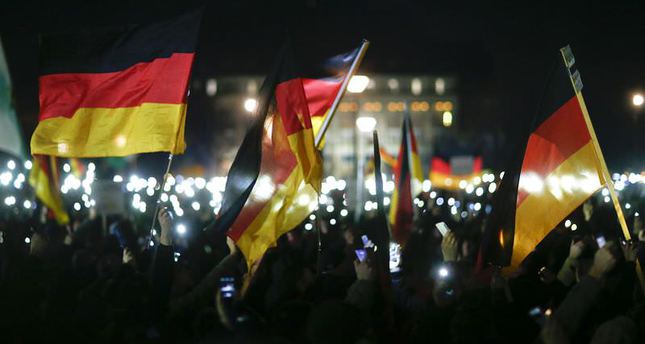 by Daily Sabah with Agencies Jan 08, 2015 12:00 am
Chancellor Angela Merkel issued a fresh call for tolerance Thursday as a poll showed that anti-Islam attitudes in Germany are on the rise.

Merkel said there was no split in society, whereas activists of a right-wing party, the Alternative for Germany (AfD), said the attack in Paris showed a "war of cultures" was at hand.

"We have a good relationship with the overwhelming majority of Muslims in Germany," Merkel said during a news conference with visiting Ukrainian Prime Minister Arseniy Yatsenyuk in Berlin. She said it was rare for young German Muslims to join extremist movements.

"We do everything to protect people of every faith - whether Jewish, Christian, Muslim or no faith at all - as citizens," she said.

The social survey by the Bertelsmann Foundation reported among non-Muslims in Germany who were interviewed in November, 57 per cent regarded Islam as a threat, up from 53 per cent in 2012, in an annual appraisal of attitudes towards religion.

The survey also reported that 90 per cent of those German Muslims who consider themselves highly religious agreed in interviews that democracy was a good form of government.

Nine out of 10 of all Muslims surveyed said they knew non-Muslims outside of work. Half of respondents said their social contacts were evenly balanced between Muslims and non-Muslims.

"Germany has become their home country, yet the apparently negative image generated by a minority of radicals touches on them all," said Yasemin El-Menouar, Bertelsmann's expert on Islam.

About four million of Germany's 80 million people are Muslims, mostly of Turkish origin.