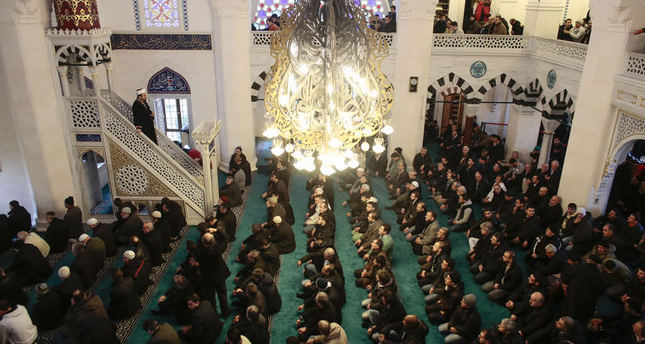 by AA Jan 09, 2015 12:00 am
Mosques around France have paid tribute to the victims of the attack on the offices of French satirical magazine Charlie Hebdo which left 12 people dead.

The French Council of the Muslim Faith (CRCM) and the Union of Islamic Organizations of France called on the imams of the 2,300 mosques in France to devote their Friday preaching to the condemnation of "violence and terrorism".

"It's a special occasion today to call for solidarity," said Houssen Amode, representative of CRCM ahead of Friday prayers.

France, the home to one of Europe's largest Muslim populations, witnessed several attacks on Muslims' places of worship places after Wednesday's deadly attack in Paris.

Several training grenades were thrown into the courtyard of a mosque in the French city of Le Mans on Wednesday. One exploded, but no one was injured.

Near Narbonne in southern France, several shots were fired in the direction of a Muslim prayer hall shortly after evening prayers.

The hall was empty, the local prosecutor said.

An explosion was reported at a kebab shop close to a mosque in eastern France on Thursday morning,

There are no reports of any injuries and the cause of the blast was unknown.

The French Council of the Muslim Faith condemned the attack on the Charlie Hebdo publication, describing it as a "barbaric act against democracy".

"We are deeply shocked by what we saw and felt at the headquarters of Charlie Hebdo, the horror stories, the unspeakable pain: it was a war field with Kalashnikov rifles and shooting in Paris," said Dalil Boubaker, president of the French Council of the Muslim Faith.

The Union of Islamic Organizations of France said: "We condemn this criminal attack and these horrible murders."

The Collective Against Islamophobia in France said the attack was a "despicable and hateful act that we denounce with force".

"We expect from our representatives responsible speeches in order to avoid any unwelcome stigma of Muslim citizens and to avoid feeding a heavy climate of prejudice and rejection," it said in a statement.

Three human rights associations - the Council for Justice, Equality and Peace, the Union of French-Turk Entrepreneurs and the Organization of Racism and Islamophobia Watch - issued a joint statement condemning the attack.

"No act justifies the barbarity and cruelty of these crimes. We can be in disaccord with the press, but the fight should be led with words against words and certainly not with weapons," the statement said.

"This act risks having heavy consequences for the Muslim community in France and puts an end to the years of work by our associations in fighting against Islamophobia and racism," it added.