Over a million protesters joined by world leaders in Unity Rally 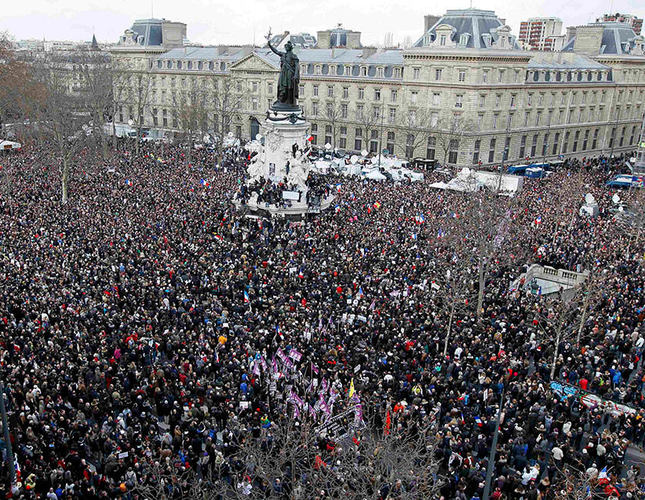 by Anadolu Agency Jan 11, 2015 12:00 am
More than 55 leaders from all over the world have arrived in Paris to join hundreds of thousands of people in a symbolic unity march to pay tribute to victims of deadly attacks in France that left 17 people dead.

The leaders along with the large crowds of people are now at the Parisian square Place de Republique, where they have started to make a symbolic walk. Initially it was planned that they would walk the entire 1.86 miles (three kilometers) distance towards Place de Nation, but because of the massive crowds, it was unlikely they would walk the whole stretch.

Before heading out for the unity march rally, French President François Hollande spoke at the Elysee Palace where he received several international and French leaders.

"Paris is the capital of the world today," Hollande said.

Earlier, Foreign Minister Laurent Fabius said "this afternoon Paris is the world capital of the resistance against terrorism and the defense of freedoms; the march will truly be a global march of freedom."

Ahead of the rally, an international meeting on fighting terrorism was held at the French interior ministry.

Cazeneuve said all sides agreed to exchange information about recruitment of militants from within their countries, and sharing of intelligence on terrorist suspects.

"We are all here today because the terrorist phenomenon concerns us all. It makes no distinction between countries or continents. We are resolute and determined to fight terrorism," he said.

The French interior minister also announced that they agreed to reinforce controls at Europe's external frontiers by modifying Schengen visa rules "to tighten checks within Europe, while respecting the rules of free movement and privacy."

Another international summit against terrorism will be held in Washington on Feb. 18, Holder announced.

Security at the rally is expected to be watertight. The French interior minister said more than 5,500 police and military personnel would be posted to provide protection to the millions at the rally.

Cazeneuve said 24 units of the national reserve, and public order representatives, would also be present.

A special unit of 150 civil police officers would also guard the visiting dignitaries. Sharpshooters on roof tops would also be posted.

More than a million people are expected to converge on central Paris as part of the "Republican march."

A number of French political parties, unions, associations and religious institutions are at the march.

However, Marine Le Pen, head of the National Front, denounced what she called the "exclusion" of her party from the march.

The National Front leader had asked for an official invitation by Prime Minister Manuel Valls, which never came.

Hollande will join his predecessor Nicolas Sarkozy, whom he defeated in the presidential election in 2012, in a rare show of unity between the two rivals.

Hundreds of thousands of people have started to pour in on streets across France. Many of them are holding up pens in their hands to show their support for freedom of expression.

In Paris's Place de Republique, where France and world leaders and family of victims are expected to lead the rally, people from different backgrounds, faiths and nationalities, families and individuals are gathered.

Many can be seen clapping their hands and wearing t-shirt or holding banners with different phrases such as "I'm Charlie," " I'm Ahmed!" in reference to the French satirical magazine and the French Muslim police officer who was shot dead.

Also, there are many people holding flags of countries apart from France, including Turkey, Tunisia, Algeria, Italy and Germany.

"I'm proud to be here today to stand for our freedom. I'm Muslim, I'm French, and I can't accept that some extremists distorted my religion and my country with such horrible and heinous acts," Fatma, a 42-year-old, French citizen told The Anadolu Agency. "We will not be intimidated," she added.

Xavier said "I'm a Tunisian French Jew; I'm in the streets today to send a message to terrorists, we will survive, we will not fear you. I'm used to be living and coexisting with Muslims, those fanatics don't represent any religion."

There are many foreigners in the rally as well.

Tsui, a Chinese French literature student, said "It is not about the nationality, we don't need to be French to attend this march. I'm here to say no to terrorism and yes for freedom and tolerance."

Waves of people can be seen singing La Marseillaise, national anthem of France as they head towards Place de La Republique.
All the three suspected gunmen, who were involved in the worst terror attacks France saw in decades, were killed Friday, according to authorities.

The terror alert, however, remains at its highest level in Paris.