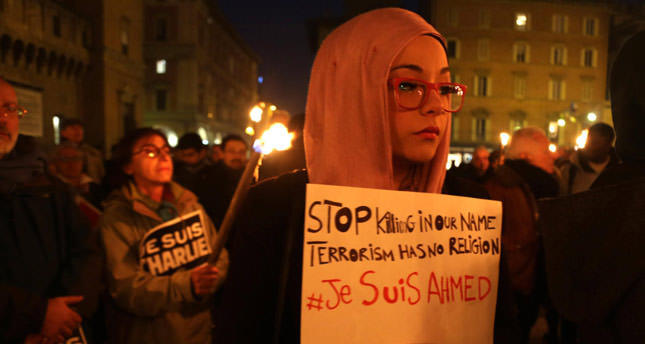 by Associated Press Jan 12, 2015 12:00 am
The family of the French police officer who was brutally shot dead by two gunmen as he came to the defense of the satirical French magazine Charlie Hebdo has called for calm and an end to xenophobic attacks that increased in the wake of the recent deadly attacks in France.

Malek Merabet, brother of French Muslim police officer Ahmed Merabet, who was shot dead by the Kouachi brothers as he strove to defend Charlie Hebdo in Wednesday's attack, made an emotional appeal. "I address this to all racist, Islamophobic, anti-Semitic people out there, that one must not mix up extremists and Muslims. My brother was killed by people who pretend to be Muslims. They are terrorists and that's it."

"Stop attacking mosques, churches or any place of worship because you are attacking people … It won't bring back the dead and it won't comfort the families," stressed Malek.

Among the victims of the Charlie Hebdo attack, which killed 12 people, were satirical journalists and cartoonists regarded as legendary across France, editor Stephanie "Charb" Charbonnier, Bernard "Tignou" Verlhac, Jean Cabu and George Wolinski. Renowned economist and writer Bernard Maris was also killed. The journalists were attacked in the middle of an editorial meeting.

"I don't want there to be any incidents in France or the world … Islam is a religion of peace, of love … My brother was a Muslim and he was killed by two terrorists," said Malek. He said that officer Ahmed Merabet was a French Muslim of Algerian origin "very proud to represent the values of the French republic."

"He looked after his mother and his family since his father died 20 years ago. He was the pillar of his family," said Malek. The family members expressed their "devastation" because of this "barbaric act."

Another family member denounced how some media had chosen to publish the picture of AhmedMerabet in the moments before he was shot. Asked how she received the news, Merabet's wife said that she was watching TV in a restaurant that time but she couldn't recognize the police officer as her husband. She told reporters that she texted him but he didn't answer. She went back to work, and that's when her sister in law called her and told her the news. "I can only be proud of his commitment to defend others, but for now all I can do is to mourn after him," Ahmed's wife said.

The hashtag #JeSuisAhmed or I'm Ahmed has emerged in support of Ahmed after videos of his killing was shared by millions of people online, including Twitter. Many people, including Muslims all around the world used the tag to honor Merabet, who left a wife and two children behind. "#JeSuisAhmed, the policeman died defending a magazine's right to insult his religion and culture," tweeted Haroon.

Lebanese activist Dyab Abou Jahjah tweeted: "I am not Charlie, I am Ahmed the dead cop. Charlie ridiculed my faith and culture and I died defending his right to do so.

The Huffington Post wrote that the hashtag for the officer "reminds us that a French Muslim died to protect free speech." #JeSuisAhmed got thousands of mentions in the past 24 hours, according to Topsy, a social analytics website, while #JeSuisCharlie was tweeted millions of times.

The three gunmen, including the two Kouachi brothers and Amedy Coulibaly, 32, were involved in the worst terror attacks France saw in decades, which resulted in the killing of 17 people. The three were also killed.