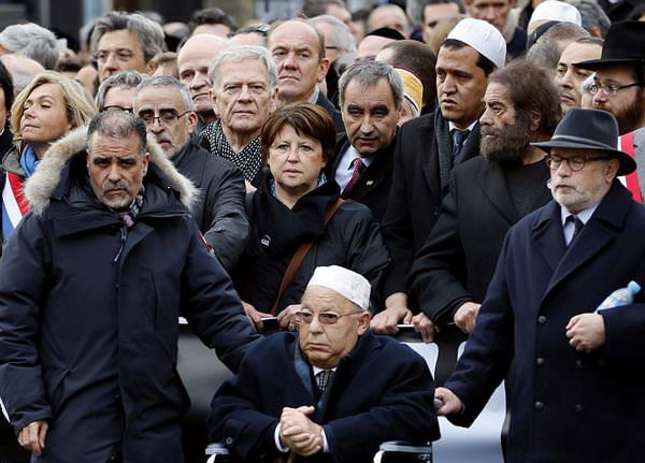 by Anadolu Agency Jan 14, 2015 12:00 am
Muslim organizations in France have condemned the fresh publication of a caricature of the Prophet Muhammed on the new edition of Charlie Hebdo, describing it as "discrimination against Muslims.".

Their comments came after the French satirical magazine reportedly increased its print run to five million copies on Wednesday after it rapidly sold out in France, a week after 12 people were massacred in a gun attack on the Paris headquarters of the weekly.

The cover depicted Prophet Muhammad in a white dress and shedding a tear, holding up a sign reading; "Je suis Charlie" below the headline "All is forgiven."

The leading Muslim cleric in Paris, Dr. Dalil Boubaker, said ahead of the release of the magazine, "All Muslim organizations in France ... call on the Muslim community in France to remain calm and avoid emotional reactions incongruous or incompatible with their dignity, while respecting the freedom of expression."

He added, "All Muslim organizations in France are concerned about the numerous anti-Muslim acts observed in recent days and call on the authorities to be vigilant to ensure the safety of mosques."

Abdallah Zekri, head of the National Observatory against Islamophobia, told France Info that Muslim places of worship, including Paris' main mosque, were not receiving the same level of protection as that afforded to Jewish synagogues and schools.

He said, "There are websites calling for the murder of Muslim leaders and torching of Muslim religious sites."