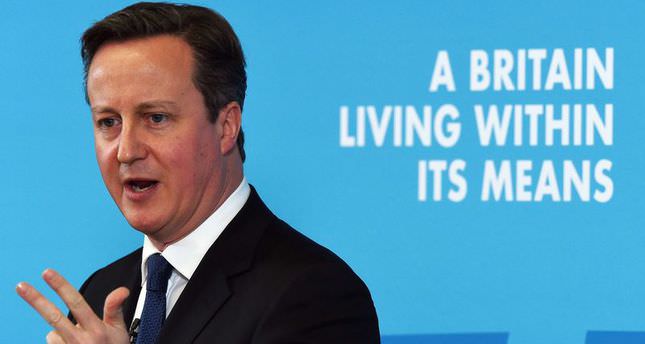 by AA Jan 15, 2015 12:00 am
British Prime Minister David Cameron has said his Conservative Party will seek a vote on a law to ban all forms of telephone communication in the UK which the intelligence services cannot access, if it wins the next election. In a proposal which some critics described as "totalitarian", Cameron attacked telephone chat applications including WhatsApp, iMessage and snapchat which encrypt their data, making it almost impossible for intelligence agencies to read personal communications of members of the public. Cameron claimed that a new surveillance plane was needed in the UK following last week's attacks in France in which 17 people died, under which the security services could get access to communications and phone conversations with a warrant from the Home Secretary.

Independent computer security expert Graham Cluley told the UK's Guardian newspaper: "It's crazy. Cameron is living in cloud cuckoo land if he thinks that this is a sensible idea, and no, it wouldn't be possible to implement properly." The UK surveillance watchdog Open Rights Group said the prime minister's plans appeared "dangerous, ill-thought out and scary." The group has launched a campaign, Don't Spy on Us, along with other civil rights groups including Liberty and English Pen which calls for public backing to curb state surveillance in the wake of the revelations by NSA whistleblower Edward Snowden of U.S. and western domestic spying activities. The groups declare on their website, www.dontspyonus.org.uk: "The UK's intelligence services can process 21 petabytes of data per day - that's 39 billion pieces of information that could be the private data of any citizen. This mass surveillance violates your privacy and chills free speech across the globe." "The current law offers little protection. We are calling for reform of the legal framework so the intelligence agencies stop spying on us," the statement reads. The groups argue: "The current (UK) laws haven't stopped the intelligence services expanding their reach into our private lives. "Don't Spy On Us is calling for an inquiry to investigate the extent to which the law has failed and suggest new legislation that will make the spooks accountable to our elected representatives, put an end to mass surveillance in line with our 6 principles and let judges not the Home Secretary decide when spying is justified."

Cameron claimed in a speech in Paris that the people of the United Kingdom "do not want to allow a means of communication between people [...] we cannot read". Apps like Telegram, Cryptocat or iMessage would be affected by any such move. His comments came a few months ago after Google announced Android Lollipop, and Apple unveiled iOS 8, which have default data encryption in their operating systems which theoretically allow owners to protect their information using a key.

Observers said Cameron's intentions reflected the content of laws which could be proposed following the attacks in France which left 17 people dead last week. Cameron said: "If it is possible to listen to somebody's phone calls, the same has to be applied for mobile communications."