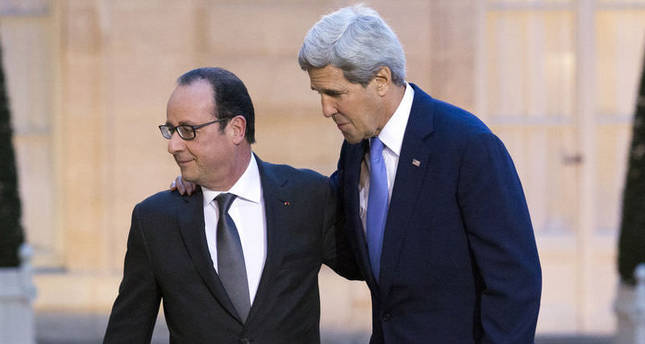 by Anadolu Agency Jan 16, 2015 12:00 am
U.S. Secretary of State John Kerry apologized Friday to his French counterpart Laurent Fabius for not attending the rally in Paris in last Sunday following attacks that killed 17 people in France.

American officials were nowhere to be found in the Paris march last Sunday, which was attended by more than 40 world leaders, invited by Hollande, including German Chancellor Angela Merkel, Turkey's prime minister Ahmet Davutoglu and Israeli premier Benjamin Netanyahu.

Kerry "apologized" for his absence, Fabius told reporters following a meeting with his counterpart. "He told me it had hurt him not to be (at the rally)," added the French foreign minister.

Twelve people were killed last week when masked gunmen attacked the Paris headquarters of satirical magazine Charlie Hebdo, which is known for printing controversial material, including cartoons of Prophet Muhammad in 2006 and 2012.

Two suspects in the shooting, brothers Said and Cherif Kouachi, were killed last Friday in a warehouse in Dammartin-en-Goele, a small town north of Paris.

On the same day, four other people were killed in a kosher supermarket in Paris by Amedy Coulibaly, who had connections with the Kouachi brothers and was responsible for the death of a municipal policewoman the previous day.

He was shot dead by police inside the supermarket.

The French minister said Kerry had expressed his condolences to the families of the deceased.