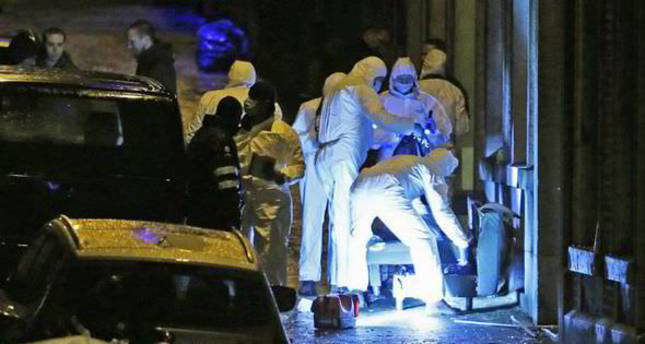 While being dragged into more chaos, European countries launched major anti-terror operations to counter the growing threat posed by the Europe's 2,500 to 5,000 radicalized, home-grown militants. Belgium, France and Germany are taking action to bring down Islamic State of Iraq and al-Sham (ISIS) recruiting networks, which pose a great security threat for all European countries. During continuing searches for suspected ISIS-linked militants, more than two dozen suspects were arrested in these three European countries, and the number is expected to rise as the anti-terror raids continue unabated to prevent attacks like the deadly rampage at the French satirical magazine Charlie Hebdo in Paris.

Ever since the rise of ISIS, European countries have been suffering from increasingly becoming ISIS-recruiting hubs. The number of Europeans who have fought for ISIS in Syria and Iraq has led to growing concerns over the radicalization and recruitment of many young Europeans through ISIS-linked organizations.

During anti-terror raids in Belgium on Thursday night, two suspected jihadists in the eastern town of Verviers near the German border were killed during clashes with Belgian police. Since then, security across the country has been beefed up. Jewish schools in Brussels and the port city of Antwerp remained closed Friday due to fears of possible attacks.

Belgian authorities fear that many militants who join the fight through recruitment networks linked to ISIS could carry out terrorist attacks after they return to Belgium. As the number of Belgians leaving to join ISIS is on the rise, it is believed that radicalized Belgians pose a grave national security threat. It is estimated that around 450 young people from Belgium, a small European country with a population of 11 million, have joined ISIS. Some believe that the low integration rate of the Muslim population in Belgian society is why a significant number of young people are being radicalized and join ISIS-led organizations.

French police detained 12 people on Thursday night in the suburbs of Paris in connection with the deadly attack on the satirical magazine Charlie Hebdo where 17 people were killed last week. A large number of French nationals have looked to travel to Iraq and Syria to fight alongside radical ISIS militants. "There are 1,400 individuals who are involved in departures for jihad, for terrorism, in Syria and in Iraq," French Prime Minister Manuel Valls said Monday, as reported by Agence France-Presse.

French President Francois Hollande pointed out the need for a "firm" and "collective" response to fight increasing terrorist acts in Europe. "Our response has to be firm in the face of terrorism. It can only be collective ... We are waging a war against [terrorism], not a war against a religion, but a war against hate," Hollande said.

"The most lasting response is firm and unified action for peace and international security. Because unresolved conflicts are sources of inspiration for terrorists and areas of chaos are their training ground," he said to ambassadors to France from around the world on Friday.

Raids and a series of related search operations across Germany are ongoing. An alleged leader of a group planning to carry out an attack in Syria and the man in charge of financing were arrested by German police. "We found and confiscated airline tickets during the search," German police spokesman Stefan Redlich said. "The investigations have been under way for a year. This roundup itself has been in planning for a long time," Redlich said, adding there was no evidence the group was planning attacks in Germany, according to dpa. German police said that around 550 people from Germany have traveled to the war zones in Syria and Iraq.