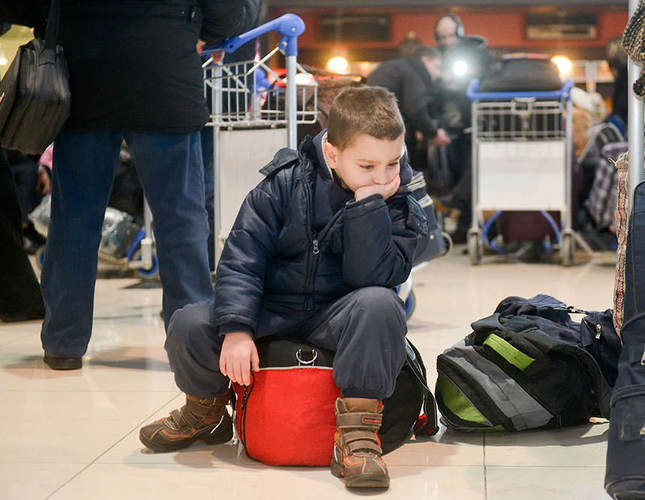 Europe is witnessing a major humanitarian crisis in eastern Ukraine that recalls the tragedy of the Balkan Wars of 1912-1913, which forced millions of Balkan Turks to flee from their centuries-old homeland

Europe has yet to face a major refugee crisis caused by the months-long conflict in eastern Ukraine. Brutal, bitter fighting and miserable sieges once again dominate contemporary European history as more Ukrainians suffer heavily from the ongoing crisis.

"More than 630,000 Ukrainians have been internally displaced, and some 590,000 people have fled to neighboring countries. In addition, more than 5 million people are living within the conflict zone," the Norwegian Refugee Council said, adding that the recent European displacement crisis resembles the Balkan's turbulent past, just as in the 1990s when a wave of Turks were expelled from the Balkan territories and took shelter in Turkey.

As more than 1 million Ukrainians have been forced to flee from the clashes between Russian-backed rebels and Kiev government forces, this growing humanitarian crisis recalls the Balkan Wars of 1912-1913 when millions of Muhacir (Balkan Turks) were subjected to human rights violations and expelled from Balkan territories.

Ukrainians in the embattled east of their country are now sharing the same fate with Balkan Turks. The Balkan Wars represent the first grim scenes of warfare in Europe while serving as an example for the ongoing months-long crisis in Ukraine, which has resulted in a major refugee crisis that Europe has not witnessed since the Balkan Wars in the 1990s. The Balkan invasion of Turkish territory in Albania, Macedonia, Bulgaria and other hostile regions caused a major refugee crisis and humanitarian suffering, of which the effects continue to linger.

"I do not think people are aware of how desperate the situation is for tens of thousands of displaced individuals. This runs the risk of becoming a critical humanitarian crisis," said Jan Egeland Secretary General of the Norwegian Refugee Council.

The Norwegian Refugee Council warns that there is a dire need of emergency support to meet the actual needs with the number of vulnerable refugees requiring protection gradually increasing due to the irrepressible crisis in the embattled east of the country.

"We are gearing up to respond to the growing needs of an increasingly vulnerable population. The Norwegian Refugee Council will continue with the vital winterization activities while also expanding the overall program to match the needs of the people. This is a major crisis in the heart of Europe and we have an obligation to help," Egeland added.

Internally displaced Ukrainians living in the restive east have been suffering from a major humanitarian crisis, as basic services and infrastructure have been badly affected by the increase in violence, and many houses and buildings have been destroyed during the heavy clashes. The winter is yet another significant difficulty for displaced Ukrainians.

"There is an urgent need to repair damaged houses and to provide materials to insulate communal buildings in conflict areas where many of the displaced are staying. We must do all we can to prevent more people from freezing to death," said Abdulrahman Shikmammadov, the head of the aid operation in eastern Ukraine.

When it comes to displacement patterns, many Ukrainians chose either to stay in Ukraine or apply for legal asylum in Russia and European countries. "The number of IDPs [internally displaced people] in Ukraine stands at over 275,000. External displacement is also on the rise," the U.N. said in September last year, stressing the importance of large-scale displacements in Ukraine.

The mediating efforts between European countries, Ukraine and Russia have led to no significant improvement to ending the months-long pro-Russian separatist rebellion in eastern Ukraine. The peace talks could not produce a breakthrough over issues relating to the settlement of the Ukraine crisis.

The gap between parties is still wide to reconcile, therefore the conflicting interests over the Ukrainian crisis prevent a sustainable settlement between Kiev and the eastern Ukrainian separatists. Meanwhile, heavy fighting has resumed in the embattled east. The ongoing clashes have mainly turned the city of Donetsk into a combat zone, as attacks around the Donetsk airport was reported over the weekend.