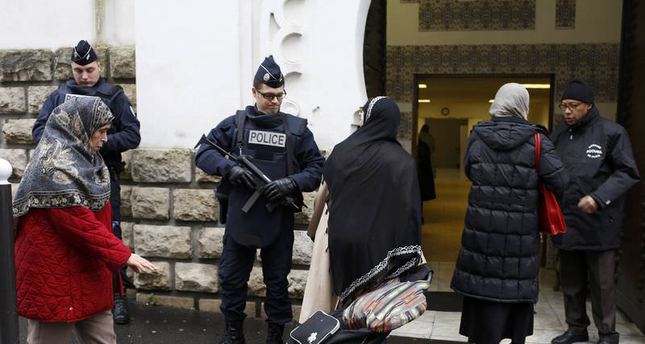 by Jan 23, 2015 12:00 am
Around 128 anti-Muslim acts were reported in France in the two weeks after the terrorist attacks in Paris by extremist gunmen earlier this month, almost as many as in all of last year, a watchdog said on Friday.

They included 33 acts against mosques and 95 insults or threats against Muslims, the National Observatory Against Islamophobia reported.
Last year, the Observatory reported 133 incidents, a 41-per-cent decline from 2013.

"These figures, however, do not reflect the reality of many Muslims, who do not submit complaints after xenophobic acts because they do not think the authorities will take action, which is unfortunately often the case," French media quoted Observatory president, Abdallah Zekri, as saying.

Three gunmen earlier this month killed 16 people at a magazine and a Jewish supermarket in Paris. A policewoman was also killed in a separate attack by one of the gunmen.

France deployed 122,000 troops and police after the attacks, and security was tighted at places deemed to be "sensitive sites," including synagogues and mosques.

President Francois Hollande called for international cooperation in the fight against terrorism.

"It's not just France that's at stake: it's freedom, it's democracy, it's the ability to live together in societies that are under attack," Hollande said at the World Economic Forum in Davos, Switzerland.

"We cannot accept that Jews are killed because they're Jews, in the same way that we cannot accept anti-Muslim acts. And we have made all possible efforts to ensure the full possible protection of all of our compatriots," he added.

Also on Friday, Amedy Coulibaly, the gunmen who on January 9 killed four people at the Jewish supermarket was buried in an anonymous grave, the AFP news agency reported. Coulibaly also killed a policewoman before taking hostages at the supermarket.