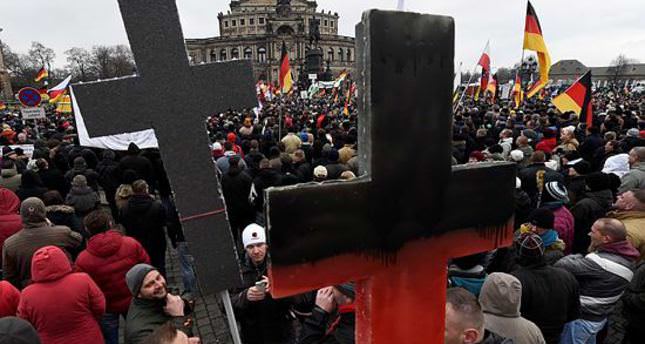 by Anadolu Agency Jan 26, 2015 12:00 am
When Adolf Hitler ordered the walls of the German capital of Berlin to be redecorated with a Nazi party poster -- the first-ever anti-Semitic poster which invited "good" German citizens to boycott Jewish traders on 1st of April 1933 - nobody thought it was a piece of paper which would lead to the worst genocide in history in 10 years' time.

The poster trumpeted: "German people! Comrades! German housewives! You all know the disgraceful methods that so-called 'German' Jews abroad are using to incite against the German people and Adolf Hitler's national government ... If we do not want to give up and sink into deeper misery, we must defend ourselves. We therefore call on you to heed the appeal of our Führer, the German people's chancellor, for a boycott against the Jews and expect the full support of each person in this defensive action."

Hitler, an Austrian-born German politician and the German chancellor between 1933 and 1945, went on to order the killing of more than 5.5 million Jews during World War II, which lasted from 1939 to1945.

His Nazi Party had successfully transformed the German Republic into a single-party dictatorship: The Third Reich.

But the Third Reich had a not-so-secret agenda; to eliminate all Jews in Germany, and then all those in Europe.

Placing anti-Semitic feelings at the heart of Nazi Germany's domestic and foreign policies was not something new and, in the following five years, the poster which openly targeted Jews spread across the walls of buildings and shops in Berlin.

On the nights of November 9 and 10, 1938, the religion-based hatred directed at Jewish people peaked when more than 100 Jewish Germans were killed during attacks which began with the smashing of windows in Jewish-owned shops.

The glass-covered streets of the German capital would give the night a name to be remembered as the start of the Holocaust: Kristallnacht.

Nazi propaganda based on the totalitarian and autocratic ideology of German National Socialism would lead to the systematic killing of approximately 6 million Jews by the end of World War II in 1945.

About 90 years after the first anti-Semitic poster prompted Germans to take action against Jews, some Berlin buildings now carry a similar one, asking citizens to join a movement against Muslims: Stoppt die Islamisierung Europa! Muslems raus! (Stop the Islamization of Europe! Muslims out!).

Anti-Muslim and Islamophobic slogans are nothing new in German society, but a more organized movement known as PEGIDA (Patriotic Europeans Against the Islamization of the West) has recently and rapidly fuelled anti-Muslim sentiments in Germany.

On January 25, only a day before the 70th anniversary of the liberation of infamous Nazi death camp Auschwitz, approximately 20,000 protesters gathered in Dresden according to the police, up from just 500 in late October in 2014.

"PEGIDA is just another expression of Islamophobic and xenophobic tendencies which were evoked especially after 9/11, in Germany," he says.

"Of course, some parts of the media bear the blame - but also some politicians and representatives of civil society. So-called critics of Islam, who were less interested in real critique but rather in spreading hostility towards Islam, were paid to incite it."

"This paved the way for Islamophobic ideas to spread more and more into the middle of society," he explains.

"Islam is a welcomed cloak to hide xenophobic, nationalistic, racist and even neo-Nazi attitudes, because they could always point to things like the Islamist terror organizations ISIL, Al Qaida, or the domestic Salafi movement and ask: "What is wrong in criticizing this?'"

"In some parts of the media you have journalists with sympathy for this, and so they helped and are helping promote hostility towards Islam."

"And on the other hand you have also journalists who are not very familiar with Islam, Muslims, integration, immigrations and so on and they just blunder in their coverage."

PEGIDA founder Lutz Bachmann revealed the movement's real sentiments last week, when he posted on a social networking site a photograph of himself sporting a hair style and moustache as worn by Hitler.

When German dailies published his photograph, it clearly offended a great many people - not only in Germany - but also in the rest of the world.

Kenan Kolat, chairman of The Association for Intercultural Diversity, Welfare and Empowerment in Germany and a prominent expert on integration issues told The Anadolu Agency that the basic messages of PEGIDA are racist and divisive.

He explained: "They are 'othering' immigrants and Muslims. One can observe many similarities between the ideas of the members of PEGIDA and the views of the recently formed party Alternatives for Germany."

"The recent developments show us that racism can gain ground at the center of society."

In the wake of the 9/11 events in the U.S. in 2001, Germany has witnessed an increase in suspicion and negative feelings towards Muslims, and in recent years far-right and rightwing populist parties have benefited from reports of murders and atrocities committed by the ISIS.

There had been 144 attacks in 2014, 34 of them arson, against the houses and camps of refugees, according to the anti-Nazi Amadeu Antonio Foundation, and the refugee rights organization Pro Asyl.

At least 68 asylum seekers were targeted by physical violence in the same period.

German police and intelligence officials have long been criticized for not properly investigating racist violence.

They are often blamed for excluding any racial motives behind attacks or murders and for instead treating immigrants as suspects with connections to mafia groups or drug traffickers.

Abdulkerim Simsek, son of Enver Simsek who was the first victim of the Neo-Nazi terror cell NSU in 2000 in Germany, has criticized the security organizations for not paying attention to the possibility that racism may have motivated the crimes.

He told The Anadolu Agency that Neo-Nazi groups are under the protection of a German police organization.

He said: "The police are not taking lessons from the past. I am not surprised by what has happened in Dresden. My family has also experienced that."

"Later on, in Cologne in 2004, when Keup street was targeted by a bomb attack, police immediately made a statement and excluded the possibility of a racist attack targeting foreigners."

He went on: "Nine years later, it is understood the NSU carried out this attack. But German police have not changed their stance."

The long-unsolved murders carried out by NSU have been a significant example of the shortcomings of German intelligence and police in combating right-wing extremism.

NSU killed eight small-business owners of Turkish origin, a Greek immigrant and a German policewoman between 2000 and 2007.

Until 2011, the police and intelligence services ruled out any racial motives behind the murders.

A total of 57 percent of Germany's non-Muslims said in November 2014 they perceived Islam as "a threat" - an increase of four percent since 2012, according to a representative poll conducted for the Bertelsmann Foundation.

According to the latest annual report of Germany's domestic intelligence organization BfV, published in June 2014, there are 22,700 far-right extremists in Germany - a majority of them members of neo-Nazi and far-right political parties.

Among them, 9,600 activists were identified by intelligence officials as extremists who were ready to use violence.

According to official German police statistics, there were 473 attacks against foreigners in 2013 - an increase of more than 20 percent compared to the year before.

German Chancellor Angela Merkel said in December 2014 that there was no place in Germany for agitation and defamation against immigrants, referring to PEGIDA rallies held in Dresden city.

She has called on the public to be careful in their association with right-wing groups like PEGIDA.

But, Simsek points out: "Unfortunately the approach in Germany has not changed, despite the tragic events of the past."