The profile of Alexis Tsipras, the youngest Greek Prime Minister 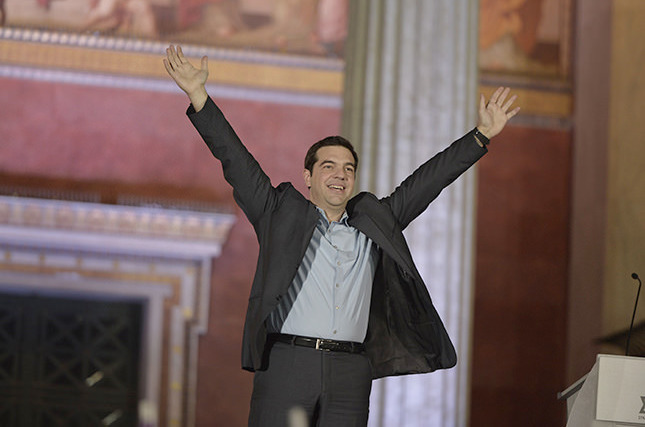 by Jan 26, 2015 12:00 am
Branded as Greece's political rock star, Alexis Tsipras made history Sunday by ushering the left into power and becoming the youngest-ever Greek prime minister. Tsipras was sworn in as prime minister later Monday, after visiting with the head of the Greek Orthodox Church, and announced the office of Greek President Karolous Papoulias.

Once sporting a thick mane of long hair, the state-educated civil engineer quickly took on the political struggles of the radical leftist movement when he was barely out of high school.

Today, the 41-year-old revolutionary leader of the anti-austerity party SYRIZA, who has openly admitted that Che Guevara is his hero, is poised to oversee a prime ministry statured by watchful eyes in the international community.

Regarded as the politician who is prepared to "stick it to Europe," Tsipras has vowed to renegotiate the terms of Greece's international austerity program.

Emerging on the political scene on a motorcycle rather than the limos favored by other Greek politicians, he was elected to parliament for the first time in 2009, moving quickly through the ranks from an irrelevant opposition politician to a formidable opponent.

Since then, the father of two has led a tireless campaign against what many Greeks consider unfair austerity measures.

His critics said Tsipras is inexperienced and unrealistic, but many European politicians including German Chancellor Angela Merkel have reacted with shock to the rise of the former Communist Party'(KKE) student leader who humiliated the pro-mainstream parties, New Democracy and the socialist PASOK, in European elections in May 2014.

Tsipras was born into a middle-class family in 1974, the year that served as a turning point in Greek history during the collapse of a seven-year dictatorship.

He faced his first hurdle in 2008 when his party opted to give political backing to thousands of anarchist youths, which launched two weeks of riots following the fatal shooting of a teenager by the police. The move did not sit well with the general public in the next election, which saw SYRIZA win just 4.6 percent of the vote.

When the financial crisis hit in 2010 with Greece already mired in recession, voters began to stand up and take notice.

The radical leftist party SYRIZA has promised to end six years of tough austerity measures, imposed by the country's creditors in exchange for billions in bailout aid.

The deep recession left nearly one-third of the population living at or below the poverty line and 26 percent of Greeks unemployed.

The charismatic Tsipras is popular with young people who have been particularly hard hit by unemployment, which is nearly 60 percent among youth. Refusing to wear a tie to this day, he joked with journalists on the day before the vote, saying he would put one on when he manages to get a haircut or debt reduction for the country, whichever comes first.