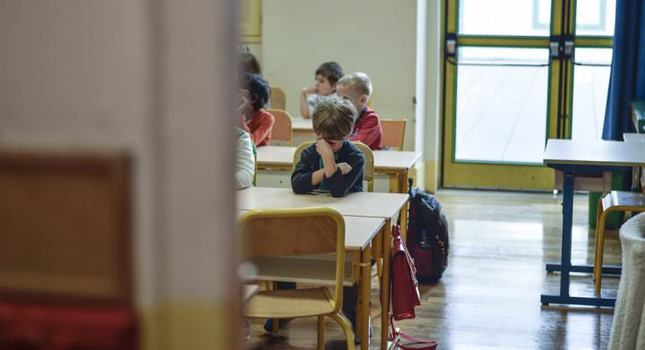 by Mehmet Çelik Jan 29, 2015 12:00 am
Tightened 'anti-terrorism' measures in France have been taken to a new level after the January 7 attacks on the satirical magazine, Charlie Hebdo, in Paris which left 20 dead.

The tightened security and surveillance measures have increased incidents which raise concerns for citizens, mostly of Muslim background.

A recent incident has added to this concern. An eight-year-old boy, named Ahmed, was questioned by the police for half an hour over alleged 'terrorist' comments made in his school in the southern city of Nice on January 28.

Marcel Authier, head of the region's public security, commented that the third grader allegedly refused to take part in a minute silence moment during a commemoration ceremony honoring those killed on the January 7 attacks, according to Agence France-Presse report on January 29.

The boy's move was reported to the police by the school's principal, but no complaint had been filed against him, who had allegedly expressed 'solidarity' with the gunmen, according to his teacher.

The lawyer defending the child explained something of the case his twitter account. He announced 'I will attend the case of an eight-year-old child who said 'he is with the terrorists', but when the child was asked what terrorism is, he said 'he does not know''. An official comment has not been made.

Collective Against Islamophobia in France (CCIF), published an English statement on their website, which reported that the boy was asked if "he is Charlie" and that he refused to agree with the provoking cartoons of the Prophet.

"The child reported that he had been psychologically abused and described humiliations on the part of some teachers. Suffering from diabetes, he says that, following the incident, teachers took his insulin from him," CCIF added in their statement.

France has announced that a 326-million Euros budget has been allocated to a program aiming to fight 'terrorism' after the recent attacks. The program, announced by Manuel Valls on January 21, aims to provide tools for enhanced surveillance on terrorist 'suspects'. The program will employ 2,700 more people, including intelligent officers and police, and introduce advanced surveillance equipment.
Last Update: Jan 29, 2015 4:40 pm
RELATED TOPICS