Turks in Greece hope for more rights from Syriza victory 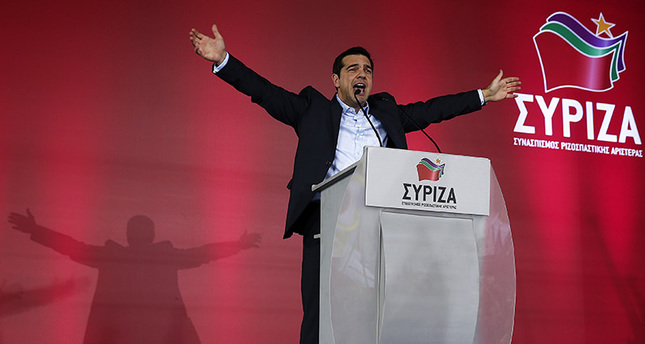 by Anadolu Agency Jan 30, 2015 12:00 am
While Greeks await an economic resurrection from their newly elected left-wing anti-bailout government, the country's ethnic-Turkish minority is hoping for more rights and "equal citizenship."

"Apart from a recovery in the Greek economy they - Western Thracians - have an expectation on minority rights," he says, referring to schooling and religious rights which he claims are underrepresented in the region.

Numbers for the amount of Western Thrace Turks vary between 60,000 and 150,000. They are a remnant of the Ottoman Empire but are not recognized as ethnic Turks by the Greek government, which classifies them among other Greek Muslims.

"Tsipras said that he wanted to see Western Thracians as equal citizens with Greeks," says Mustafaoğlu referring to Tsipras' comment made in Greece's northeastern city of Komotini - Gümülcine in Turkish - 10 days before the election.

A Western Thracian who supports Tsipras' party is 65-year-old Ferruh Sözüner who has been living in Istanbul since 1956.

"'Left' means freedom, equality and human rights and our expectations are mainly on education, economic, social and religious reforms in Western Thrace," he says.

As a financial adviser Sözüner does not believe that Syriza would be able to realize its promises on economics but is hopeful on minority rights.

However, some believe Syriza's victory was not as "overwhelming as it has been portrayed."

Greek-born associate professor on international relations at Istanbul's Kadir Has University, Dimitrios Triantaphyllou, says: "Syriza's victory came about because the Greek electorate is tired of further austerity measures which are entering their fifth year.

"Thus Syriza's message that Greece will not put up with austerity anymore struck a chord among voters," he adds.

Pointing out a major sub-story of the elections was the notorious far-right Golden Dawn party-some of whose leaders are in prison-becoming the country's third-largest political force, Triantaphyllou says: "With populism permeating Greek politics, a failure of Syriza, which has invested in the populist and demagogy cards, to deliver on its promises could push many of its voters into the Golden Dawn camp."

For some, the January 25 election was a historic moment not only for Greece but also for the whole European continent.

"Syriza's pre-election motto was 'Hope is coming' and it is for this very hope that Greek people gave [them] their votes and put them in power-for the first time in Greece's history a far-leftist party," says 32-year-old PhD candidate in International Relations at Kadir Has University, Panagiotis Andrikopoulos.

Syriza has already showed their intentions right away with a symbolic move, he adds.

"For the first time in Greek political history a prime minister took his oath without the presence of the Christian Orthodox clergy," Andrikopoulos says.

Andrikopoulos, who has been living in Istanbul for the last four years, says that thousands of young and educated people decided to leave Greece because there was "no hope and future" for them there.

"I cannot hide the fact that when I saw Syriza taking power and changing many things right from the beginning, immediately it crossed my mind that I would like to be there and live these changes," he says.