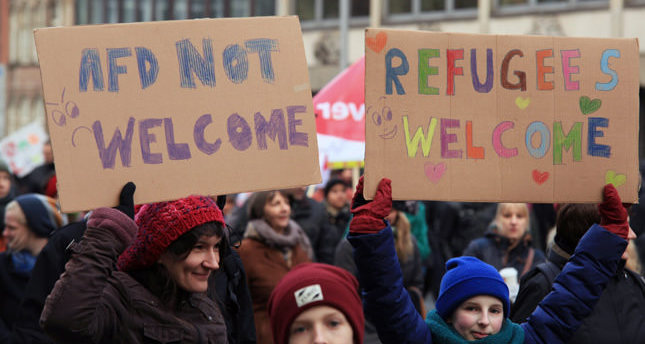 Amid PEGIDA’s anti-Muslim calls that have shaken Germany, the rising far right-wing party, Alternative for Germany, consolidates its power through changing its party structure while gaining solid support among Germans

Right-wing parties and organizations have dominated Germany's political landscape of late while striking a chord with many Germans after gaining solid social support in German society. The latest example is Germany's Eurosceptic and anti-immigrant Alternative for Germany (AfD) party that is considering an alliance with the troubled anti-Islamic Patriotic Europeans against the Islamization of the West (PEGIDA) movement.

The right-wing party seeks to become more professionalized and institutionalized through moving away from a three-leader model to a single chairperson in order to win seats in a western state assembly for the first time in the upcoming regional elections on February 15.

During the three-day conference held in the northern port city of Bremen, two weeks ahead of the local election, the party founder, Bernd Lucke, was elected as leader of the party, while others opposed his leadership saying that Lucke wants to concentrate too much power in his own hands. The party has long suffered from a power struggle at the top. "Lucke doesn't represent both wings and won't win over the national conservatives on the far right," said Gero Neugebauer, a Berlin political scientist. "But the AfD seems to have stabilized itself for now and will remain a problem for Merkel," Reuters reported.

With the AfD party promoting right-wing populism and xenophobia among Germans, some 10,000 protesters gathered outside the conference to protest right-wing groups like PEGIDA and the AfD party. Protesters carried signs with slogans saying "AfD, PEGIDA and Co. out of Bremen." The rise of far-right extremism has dominated the political landscape, signaling growing security concerns for Muslims living in the country. The increasing polarization of German society had fueled existential fears such as the Islamization of the country at the hands of the increasing number of immigrants fleeing from conflict in the Middle East.

Germany's new far-right populist AfD party has recently been on the rise, along with a general anti-Islam populism in the country's political landscape, promoting a far-right shift in some German politics. The anti-Islam movement held in several German cities, but primarily in the eastern city of Dresden, has portrayed Islam as a major threat, representing far-right groups and political parties. According to a recent poll conducted by Forsa and released on January 7, AfD has received five percent of the vote.

AfD has a Eurosceptic and an anti-Eurozone platform. The party triumphed with about 10 percent in three eastern states in 2014. The party won its first seats in a Saxony state parliament in regional legislative elections held in late August 2014, when anti-immigration issues were added to the party's agenda. The party also called for a referendum to stop the building of mosques with minarets in Saxony.

The tension in Germany over Islamophobia has lately been fueled by weekly marches organized by the anti-Islam far-right PEGIDA movement. PEGIDA's anti-Muslim calls have widened the rift among Germans, as many have taken an uncompromising stance toward Muslims, the largest immigrant community in Germany. PEGIDA was founded in October 2014, and right after its establishment, Germany witnessed several anti-Islamic demonstrations and racially motivated attacks organized by far-right extremist groups, promoting hatred toward Muslims and immigrants.