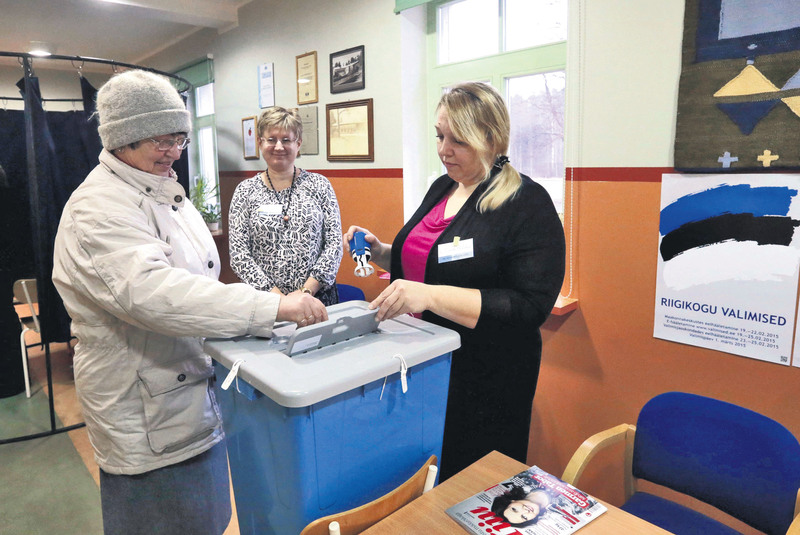 by Daily Sabah with Reuters Mar 01, 2015 12:00 am
Estonians voted on Sunday in a parliamentary election with center-right Prime Minister Taavi Roivas favored to form a new pro-NATO coalition and fend off a challenge by an opposition party that wants better ties with neighboring Russia.

Roivas' Reform Party, which has stressed fears of Russian interference in Estonia after Moscow annexed Ukraine's Crimea region last year, led with 26 percent support in a final TNS EMOR poll on Friday against 22 for the center-left Centre Party. A free-marketer and the youngest European Union leader at 35, Roivas is likely to be best placed to form a new coalition, even if the Centre Party wins the most votes.

Other big parties say they will not work with the Centre Party, which signed a 2004 cooperation deal with Russian President Vladimir Putin's United Russia Party. "Cooperation after the elections with the Estonian Centre Party would be very difficult for any of the other parties," Roivas told Reuters. The Centre Party says other parties may drop opposition to cooperating after Sunday's vote in the northernmost Baltic state of 1.3 million people, where about a quarter are Russian speakers.

Estonians voted in partly sunny weather in temperatures above freezing, in a likely boost for turnover. Other parties accuse Centre Party leader Edgar Savisaar, the mayor of Tallinn who was an interim prime minister from 1991-92, of failing to condemn Putin's actions in Ukraine. They also say his party has misused public funds in Tallinn, a charge his Tallinn city controlled government denies. The Centre Party, which gets about 70 percent of the Russian-speaking vote, wants better ties with Moscow to guarantee security for the Baltic State that was part of the Soviet Union until independence in 1991. It also says it wants to help the poor, by raising minimum wages to 1,000 euros ($1,120) a month from 390.

Under Reform-led coalition governments, Estonia has been one of few NATO members to keep defense spending at a NATO goal of 2 percent of gross domestic product. Estonia, a euro zone member since 2011, has the lowest public sector debt in the EU. Parties differ sharply over wages and tax policy.

The Russian annexation of Crimea in late March and the increasing signs of its involvement in eastern Ukraine have prompted fears among Western countries, mainly the ex-Soviet countries in Eastern Europe. Estonia is one of the main ex-Soviet countries and perceives Russia as a main security threat.
Last Update: Mar 02, 2015 10:21 am
RELATED TOPICS