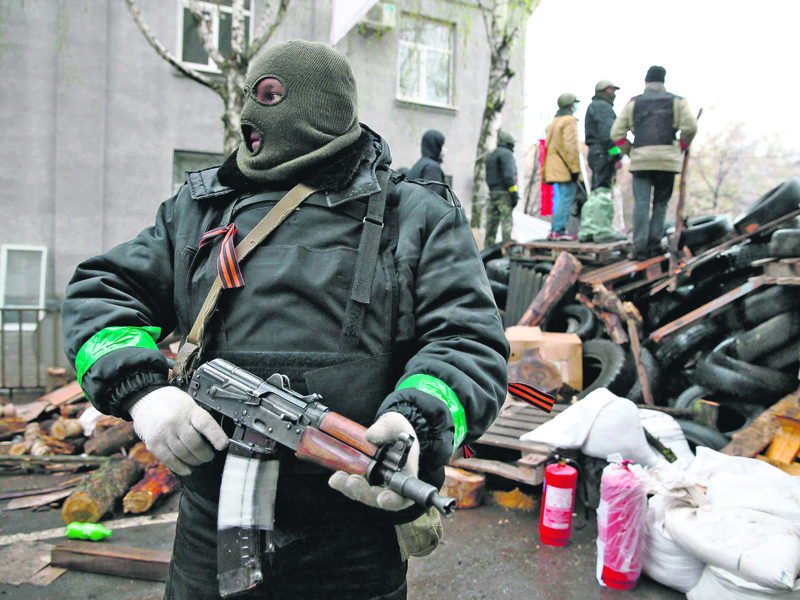 EU foreign ministers showed little appetite on Saturday for stepping up pressure on Russia over Ukraine, preferring to give a fragile ceasefire a chance before deciding whether to apply more sanctions or even to extend existing ones. Most ministers at an EU meeting in the Latvian capital pinned their hopes on the latest Minsk agreement succeeding and said the EU should only consider tightening sanctions if the ceasefire was seriously violated, such as by a separatist offensive on the Ukrainian port of Mariupol. Both Kiev and pro-Russia separatists have accused each other of violence since last month's peace accord called for heavy weapons to be withdrawn from the frontline in east Ukraine.

Italian Foreign Minister Paolo Gentiloni saw "encouraging signals" on the ground in eastern Ukraine. "At the moment we don't need either new sanctions or automatic renewals (of sanctions)," he told reporters. Austrian Foreign Minister Sebastian Kurz agreed. "There is a glimpse of hope since Minsk ... We should do everything now to improve the situation and decide later whether that improvement really happened and we can reduce the sanctions, or if we have to extend them," he said. The comments reflect divisions within the 28-nation EU over sanctions on Russia, the bloc's biggest energy supplier.

While Britain, Poland and the Baltic states are taking a tough line, many other EU members, including Italy, Austria and Cyprus, are skeptical about sanctions. Alexis Tsipras's election victory in Greece has strengthened the dovish camp. A key decision that the EU must face soon is whether to extend economic sanctions against Russia which it adopted for one year last July. Unanimity is required to extend them. French Foreign Minister Laurent Fabius said on Friday that a debate was going on in the EU, with some countries saying the bloc should state now that it would extend the economic sanctions until the end of the year.

"Others say it would be a bit contradictory to say, on the one hand, Minsk is being applied and on the other hand we are going to go [extend sanctions] until the end of year," Fabius told reporters in Riga. He said a decision on whether to extend existing economic sanctions on Russia could wait until around July. "If Minsk develops positively, then it is likely that nothing new will be done on sanctions," he said. If, on the other hand, there were serious violations to Minsk, sanctions remained available, he said. Lithuanian Foreign Minister Linas Linkevicius, an EU hawk on Russia, said on Friday that extending sanctions to the end of the year was "the least we can do". Belgian Foreign Minister Didier Reynders said on Saturday that existing sanctions would probably be extended until year-end. "What matters is that ... we maintain unity within the EU, and above all that we continue to put on pressure so that things change on the ground," he said.

While EU countries are reluctant to impose new sanctions on Russia but maintain the ones in effect, China is cooperating with Russia. China vowed Sunday to plough ahead on economic and diplomatic cooperation with Russia despite Western sanctions against Moscow over the conflict in Ukraine. "The practical cooperation between China and Russia is based on mutual need, it seeks win-win results and has enormous internal impetus and room for expansion," said Beijing's foreign minister Wang Yi. As well as sanctions, President Vladimir Putin's Russia is facing a sharp decline in its ruble currency amid an economic crisis fuelled largely by plunging oil prices.

Both countries are permanent members of the United Nations Security Council, where they have in the past jointly used their veto power against Western-backed moves such as in the civil war in Syria.

Wang told reporters on the sidelines of the National People's Congress, China's Communist-controlled parliament, that Beijing and Moscow will "continue to carry out strategic coordination and cooperation to maintain international peace and security." Wang's comments signal that Putin, assailed by the West over the annexation of Crimea and the ongoing conflict in eastern Ukraine, can count on continued Chinese economic and diplomatic support. Beijing and Moscow, allies and then adversaries during the Cold War, have over the past quarter century often found common ground internationally, frequently taking similar stands at the U.N. They have also forged increasingly closer economic ties, with China hungry for Russia's vast hydrocarbon resources. Western sanctions have made seeking stable markets an urgent need for Putin, whose economy has been hit hard by the fall in prices for oil, a major source of revenue. Putin and Chinese President Xi Jinping, who met five times, last year, have a close personal relationship.

Xi told visiting Russian foreign minister Sergei Lavrov in February that the two countries' "cooperation grows ever deeper". In the economic arena, the two sides will "work hard" to increase bilateral trade to $100 billion, while intensifying cooperation in the financial, oil and gas and nuclear power sectors, Wang said, after China-Russia trade totalled $95.3 billion last year. Among other results, he said they would begin "full construction" of an eastern natural gas pipeline and also sign an agreement on the western route. Wang added that they would "accelerate joint development and research" on long-range wide body passenger jets, begin working together to develop Russia's far eastern region and step up cooperation on high speed railways.
Last Update: Mar 09, 2015 3:50 pm
RELATED TOPICS