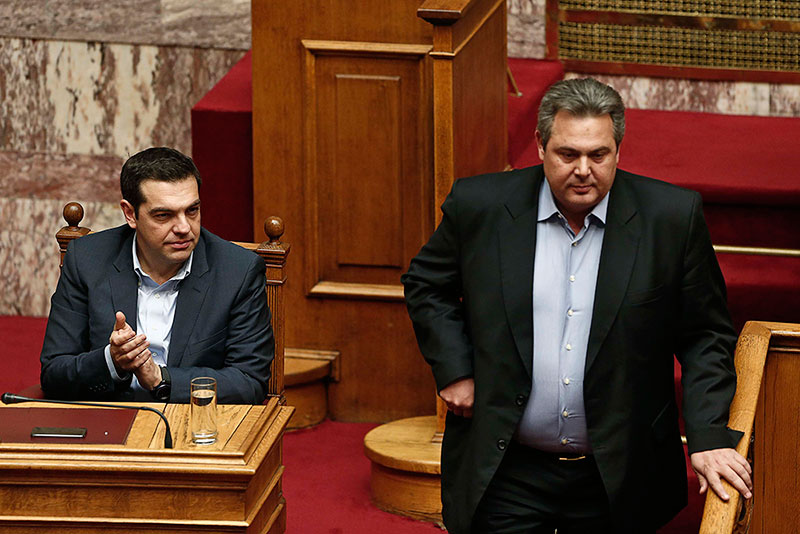 by Mar 10, 2015 12:00 am
Greek Defence Minister Panos Kammenos on Sunday threatened to unleash a massive outpouring of refugees within Europe over Athens' economic standoff with the rest of the eurozone.

"If they deal such a blow to Greece, then they should know that the migrants will receive (travel) documents and head to Berlin," Kammenos said at a meeting of his far-right Independent Greeks party.

The party is the junior partner in the new coalition government of leftist Prime Minister Alexis Tsipras. Kammenos said that if there were members of the self-proclaimed Islamic State of Iraq and al-Sham (ISIS) among the refugees, then Europe is itself responsible through its stance in the question of Greece's debt and reforms, Kammenos said.

Just a week ago, Vice Interior Minister Giannis Panousis issued a similar warning. The German police union responded with the suggestion that Greece should be excluded from the Schengen Area of 26 European countries that has abolished passport and other border controls within their internal borders.

Greek Foreign Minister Nikos Kotzias warned on Friday on the sidelines of a meeting of EU foreign ministers in Riga that Greece could become the entry gate for "millions of immigrants and thousands of jihadists" if the country's economy collapses.

The European Union's Migration Commissioner, however, received assurances from Greece on Monday that it has no intention of unleashing a massive outpouring of refugees within Europe by opening the doors of its detention centres.

Athens and its creditors agreed in late February to prolong the European portion of the Greek bailout, following fraught negotiations with the Tsipras government.

The country has hinted that it may face difficulties meeting major debt repayments this summer. But it cannot access the 7.2 billion euros (7.8 billion dollars) left in its bailout until it agrees reforms with its creditors - the European Commission, the European Central Bank and the International Monetary Fund.