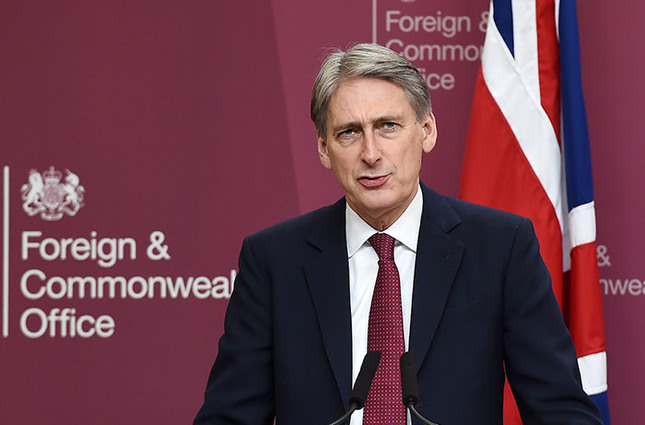 by Anadolu Agency Mar 10, 2015 12:00 am
The British foreign secretary has claimed that Russia's "aggressive behavior" is a stark reminder that it has the potential to pose the greatest single threat to the U.K.'s security. His comments drew a sharp response from Moscow's ambassador in London.

"Continuing to gather intelligence on Russia's capabilities and intentions will remain a vital part of our intelligence effort for the foreseeable future," Philip Hammond said in a speech to the Royal United Services Institute think-tank in London.

The British foreign secretary said that it was "no coincidence" that U.K. spy agencies were recruiting Russian-speakers again.

However, Russian ambassador to London, Alexander Yavenko, hit back saying that the minister's remarks "prove John Le Carre right: intelligence services are a spiritual home of the British political elite."

In a wide-ranging speech, Hammond said that Britain in the 21st century was faced with a diverse range of threats, hitting out at those he called "apologists" for blaming the U.K.'s intelligence service for radicalizing militants.

Hundreds from Britain have joined Daesh - also known as ISIS - in recent years, many fighting in Syria and Iraq.


Hammond said a major security threat was from the radicalization of individuals-so-called "lone wolves." He said that the internet had become a source of terrorist inspiration, with much of the propaganda coming from terrorist groups like al-Qaida.

Talking about "state adversaries" Hammond accused Russia of "clear disregard" for the rule of international law.

He said that for two decades since the end of the Cold War, Britain and its allies had sought to draw Russia into a rules-based international system but "we now have to accept that those efforts have been rebuffed."

"We are now faced with a Russian leader bent not on joining the international rules-based system which keeps the peace between nations, but on subverting it," he said.

Britain has joined the U.S. and the EU in sanctions against the Russian Federation following what the West calls the annexation of the Autonomous Republic of Crimea, which was part of Ukraine until March 2014.

More than 5,300 people have been killed and 12,200 others injured in eastern Ukraine since mid-April last year in the ongoing conflict between the Ukrainian army and pro-Russian separatists, the UN high commissioner for human rights said in February.
Last Update: Mar 10, 2015 5:58 pm
RELATED TOPICS