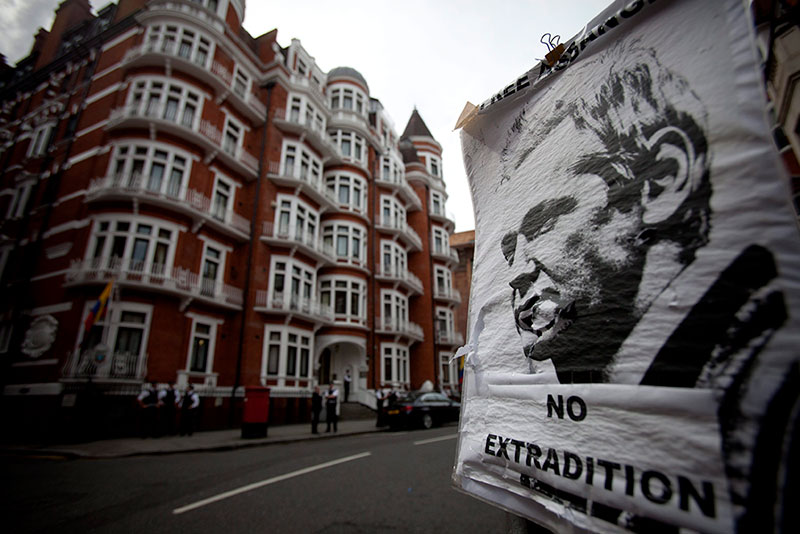 by Mar 13, 2015 12:00 am
WikiLeaks founder Julian Assange, who on Friday agreed to be questioned by Swedish prosecutors in London over rape allegations, has been holed up in the Ecuadorean embassy for nearly 1,000 days.

Assange sought refuge in the modest apartment on June 19, 2012, to avoid extradition to Sweden over the allegations, which he strongly denies.

The embassy is located in the upmarket district of Knightsbridge but is not grand, and Assange lives in a small room divided into an office and a living area, and has use of a basic kitchen.

He has likened his confinement, which will reach 1,000 days on Monday, to living in a space station.

Facing arrest by British police if he leaves the embassy, he exercises on a treadmill and uses a sun lamp to make up for the lack of natural light, making only occasional appearances on the balcony to speak to supporters and the media.

There were hopes of a breakthrough in the case on Friday when Swedish prosecutors said they were prepared to accede to Assange's repeated requests to interview him in London.

The 43-year-old Australian sought refuge in the embassy after a British court ordered his extradition to Sweden to face allegations made by two women of rape and molestation.

He refused to go, arguing the claims were politically motivated and were a ruse that would lead to his eventual transfer to the United States, where he is under investigation for WikiLeaks' release of hundreds of thousands of secret files.

He was granted asylum by Ecuador and President Rafael Correa has said he can stay at the embassy as long as he needs to.

After breaching the terms of his bail, Assange cannot leave without being arrested and police officers stand guard around the clock, at a cost of almost £10.4 million (14.6 million euros, $15.4 million) so far, according to WikiLeaks.

The mounting cost of policing the embassy has sparked criticism in Britain, with Mayor of London Boris Johnson saying in 2013 that it was "absolutely ridiculous".

The former computer hacker is used to peripatetic living, hopping from city to city after WikiLeaks was founded in 2006, often sleeping on friends' sofas.

And inside the embassy, all he needs is his laptop to continue his whistleblowing work, and he has appeared at events around the world via video link.

WikiLeaks infuriated the United States by releasing 500,000 secret military files on the wars in Afghanistan and Iraq and 250,000 diplomatic cables.

In total, Assange has spent 1,557 days under some form of house arrest since his arrest in London in December 2010 on a Swedish warrant, according to justice4assange.com.

Before entering the embassy, he lived in the more impressive surroundings of an English country mansion owned by one of his supporters, documentary maker Vaughan Smith.